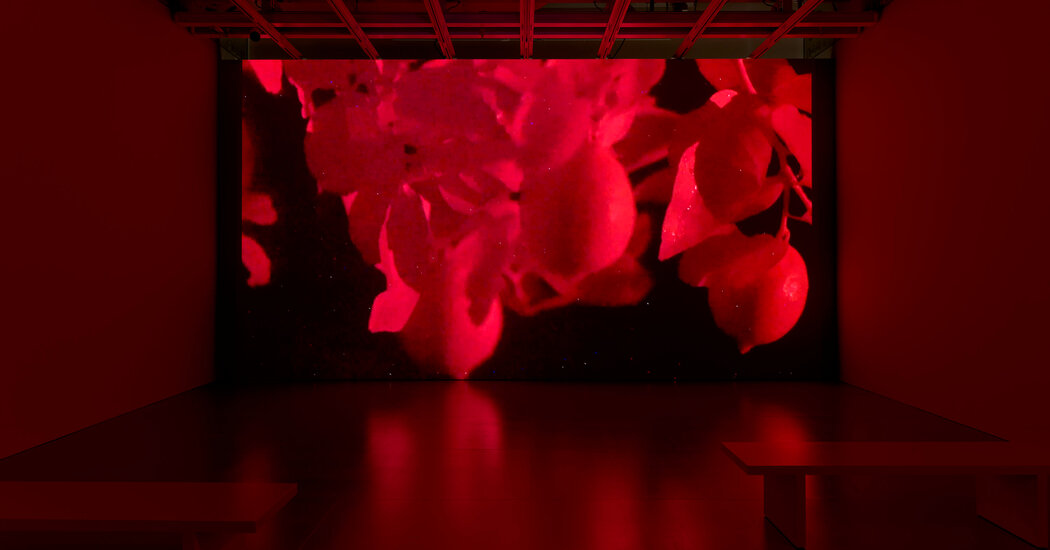 Madeline Hollander is an artist interested in quotidian movement, habits of motion, adaptations to change. So it’s fitting that her art caused me to return to a once quotidian activity that I had so far avoided during the pandemic. I visited a museum — the Whitney Museum of American Art, in New York, which is presenting Hollander’s first solo museum exhibition.

Hollander is primarily a choreographer, but this isn’t her first foray into the art world. For her “Ouroboros: Gs” for the Whitney Biennial in 2019, she made a dance out of installing segments of the Whitney’s flood-mitigation system, a task that drew attention to the museum’s location on the Hudson River’s edge, a precarious spot in a rapidly changing climate.

The current exhibition, “Madeline Hollander: Flatwing,” is a video installation with no live component. In a dark room, we watch infrared footage from Hollander’s nocturnal searches for a certain kind of cricket in Kauai, Hawaii. Spoiler alert: She doesn’t find any.

There’s more to it, naturally. The object of her quest isn’t any old insect. Because of a genetic mutation, male flatwing crickets lack the ridges on their wings to scrape out the mating songs we call chirping. This silence is a disadvantage on the dating scene, but it has protected them from a parasitic fly that has nearly eradicated the island’s easy-to-find noisy-cricket population. To lure mates, flatwings still rely on the chirping of the remaining unmuted males. Flatwings keep dancing but to someone else’s music, while the music lasts.

It’s easy to see how this might attract the mind of an imaginative choreographer. What Hollander is really hunting is metaphor. That her search is futile only gives it more potential meaning. As the senior curatorial assistant Clémence White eloquently explains in an accompanying essay, the silence of the flatwings could be heard as an alarm about ecological change; their dance could represent “a harbinger for our own inability to adapt.”

The failure is also comic. In the 16-minute video, the point of view is Hollander’s, stumbling through the rainforest as the dim, blurry, pink-and-purple video consistently fails to reveal crickets or much of anything else. Is that a cricket? No, but there’s a chicken.

There’s humor, too, on the soundtrack, in a phone conversation between Hollander and the evolutionary biologist Marlene Zuk, an expert on flatwings. The way they talk past each other is almost a comedy routine about habits of mind in different disciplines: Abbott and Costello satirizing the divide between the arts and science.

One habit that scientists and artists have in common is making something of their research. Hollander’s installation — supplemented with drawings and mind maps in an adjacent gallery — is rather like a scrapbook for a project that didn’t work out, or hasn’t yet. The experience of visiting it in person adds little to what you might gain from staying home and reading about it.

But if you’re at the Whitney anyway — say, to see the astonishing midcareer retrospective of Julie Mehretu on the same floor — you might peek in on Hollander’s video. You won’t find any flatwings, but you will hear cricket song and see a sky full of stars.

Through Aug. 8 at the Whitney Museum of American Art, whitney.org. Advance tickets required.