With Alex Sanderson now in charge at Sale Sharks, the mood music is changing up north.

On Saturday they play their second ever Heineken Champions Cup quarter-final – first since 2006 – after a heavy-metal 57-14 thrashing of the Scarlets last week.

Sanderson, formerly of Saracens, is known for providing players with a quirky theme for each match week by melding songs and humour with analysis. 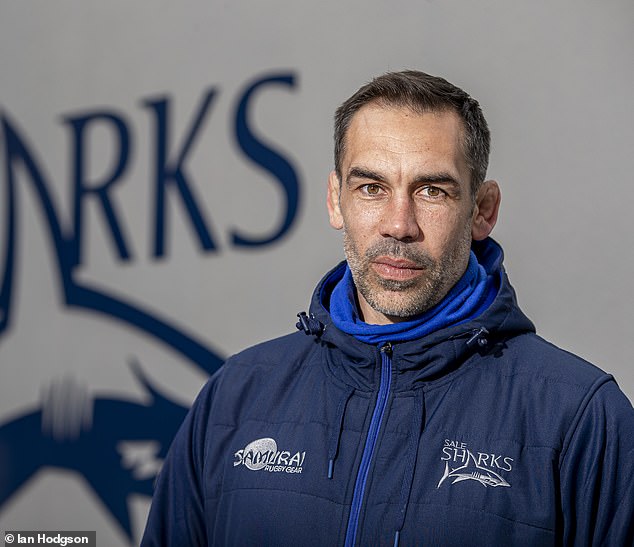 Against the Welsh in the last 16 game in Llanelli he wanted his Sharks to turn up the volume.

‘Scarlets kicking game was like Sade – they want Smooth Operator,’ he explained.

‘Nice and easy…Sound of Music, Do-rae-mi, “a long, long way to run”. They want space to run.

Sanderson knows using triggers, sounds and slogans engages synapses in the frontal lobe of brains – the Slayer music, which he blasted at players pre-match, was used to re-inforce the game plan.

It was all part of a theme of ‘slaying a dragon’ – an analogy he built like this:

‘What makes a dragon dangerous?’ started his call-and-response.

‘Fire breathing!’ is the reply Sanderson is after.

‘There we go. So they breathe fire – that’s the Scarlets, their ability to attack from distance, with width, and if you allow them to they can scorch you if you’re not on it, through fire, as they do with their attack.

‘Where do Sharks live?’ he continued.

‘What else do they have that’s different to other beasts?’ 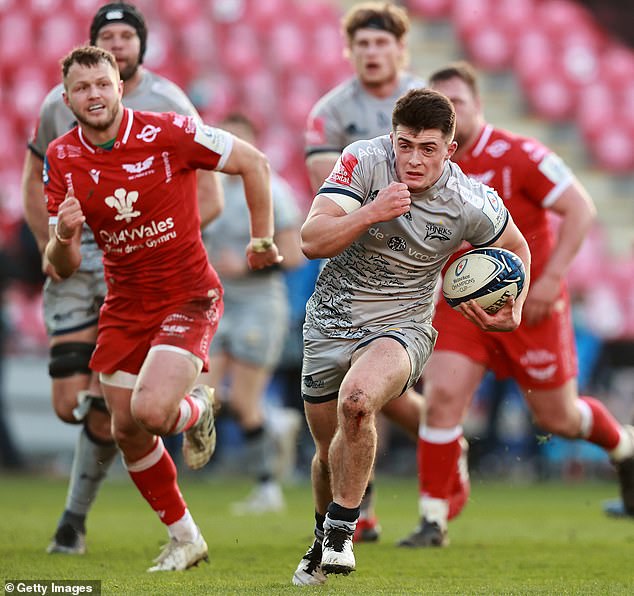 ‘So we take their wings. You’re already engaged aren’t you? You’re into it now.

‘How do we take the wings? I tell you – we talked about full-back Liam Williams, the perfect ruck, the perfect kick and how we can stop them. They’re one of the best in the business aerially, but if we take their wings, take their fire they’ve got no strengths left.

‘Then we can put ‘em to the sword. Then chop ‘em to bits. Then we talked about our attack. Those three things lead to that.’

It is different, but it works. Sale put in their most commanding performance for years and are now dreaming of European glory.

The genesis of this coaching style Sanderson employed when in Saracens’ back-room staff too comes largely from sitting bored in endless meetings as a player.

‘They stopped me liking rugby,’ he said. ‘It was coaches massaging their own egos.’

At 25 Sanderson retired with back issues but now 41 is one of the most sought-after and engaging coaches in the game. Listening to him for an hour, it is easy to see why.

Those that work with him love his honesty, engagement, and fun. He thinks he gets it from his father – ‘a nutcase’ – he joked, who would make him stand on a chair after under-13 Lancashire games and give speeches thanking dinner-ladies and opponents.

‘I hope I live to be the man he was,’ said Sanderson. 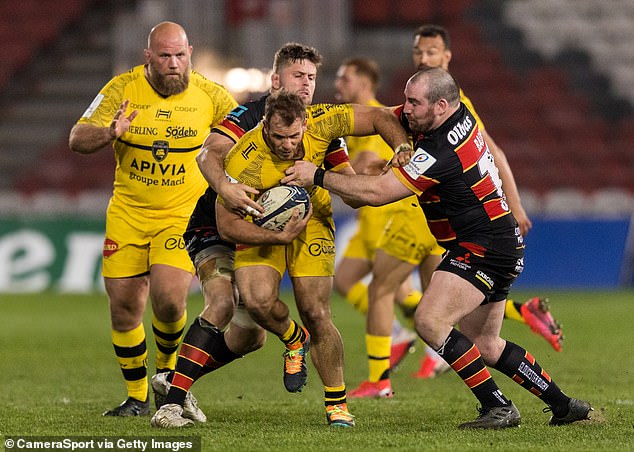 Sale fly-half AJ MacGinty has been enjoying the pool, darts and table-tennis, the ‘trademark meetings’ setting six-week goals, and the concentration on bonding a brotherhood.

‘He’s a genius,’ says the Irish-American of his coach.

‘He pushes the buttons and we seem to be rising to the occasion on game-day.’

Sanderson seems to understand what makes blokes tick. Joining in January, taking over from his old Sale boss Steve Diamond, he has the finger on the pulse of his new squad.

‘This team are very emotional, more emotional than I’ve been used to,’ he explained.

‘All the big, stoic, alpha South Africans, you think are going to be very closed, uncommunicative, resistant to relationship building have been the ones who have opened up quicker, easier, freer.

‘Like 6ft 5in back-row Jean-Luc Du Preez, who just runs around like a psychopath and yet off the field talks about his loves, ambitions and what drives him, it is quite surprising.

‘Everyone’s got a purpose. Ask any group of males and it comes down to three things: family, money or success.

‘It can’t just be about money. It can’t be about the pound because that is a secondary motivator. Is it about status? Is it because you’re from a poor family so for you having a nice car or a nice house means you are succeeding? 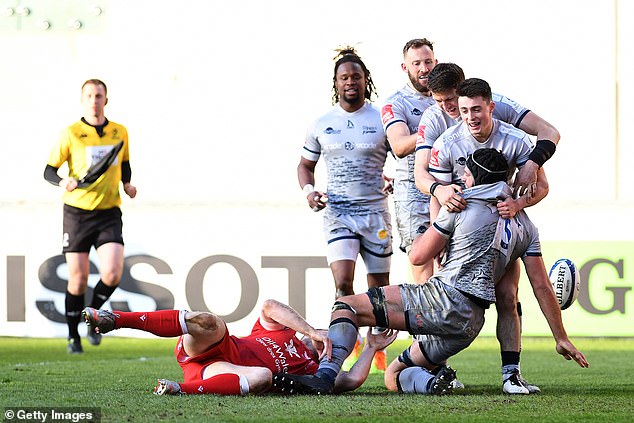 ‘If it’s about trophies, it’s a fleeting instance. But if it’s about recognition for efforts, you can get that every day. You don’t need a trophy for that. It’s for them understanding the meaning of the purpose, not just the purpose alone.’

While this is a homecoming for Sanderson, who was a Sale flanker between 1998 and 2004 and won five England caps in that time, he does not view it as the easy option.

That would have been staying at Saracens, who offered him the same money as Sale for five years to remain defence coach, motivational guru and help drag the salary-cap breakers from the Championship.

It was where he built his name having been part of former coach Brendan Venter’s boot-room with Andy Farrell, Mark McCall, and Paul Gustard – the latter ex-Harlequins coach with whom he has regretfully lost touch.

He had two international offers too, with England never too far from his inbox in recent years either.

‘If it was about getting out to further my career, I would have gone then,’ he added.

‘Why I didn’t was my debt of loyalty to the players, to chairman Nigel Wray and the rest of the coaches to stick by them when the bombs were falling and the bullets were flying.

‘After the Leinster quarter-final win last year I felt like I’d weathered much of the storm. It was an easier ethical decision to make.’

Born in Chester and raised in Rossendale he feels a sense of belonging at Sale, having returned after 17 years away.

‘Thems that get out of Rossendale have done quite well!’ he joked of his old mill-town home. 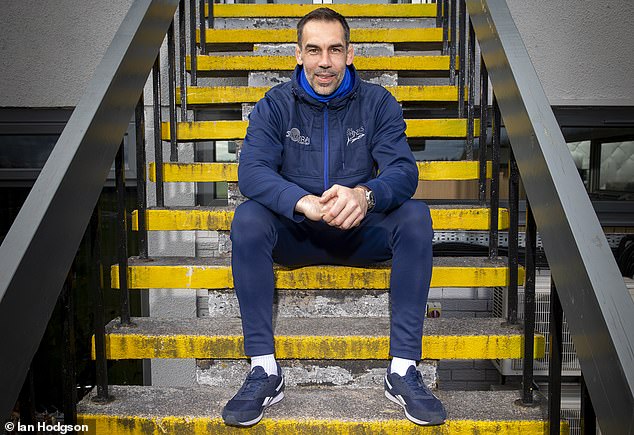 Now in Knutsford – so as not to be tempted by Thursday pub trips if in the more sociable Didsbury – he is loving being back up north having spent lockdown legging it round Hampstead Heath ad infinitum.

‘I’ve been up the Pennines, round Macclesfield Forest, Delamere Forest, all the places I used to go as a kid,’ he smiled.

‘The sense of nostalgia, taking my four-year-old to where I dossed around as a kid is massive.’

So Sanderson fits here perfectly. While he and Saracens cultivated an “us-against-the-world” attitude in the early days, he realised a chip on the shoulder can only last so long.

Sale have perennially viewed themselves as the unfancied, down-trodden, under-appreciated arm of English rugby. Stuck up in the north west, out of sight and out of mind.

‘It’s funny init, the culture of some rugby clubs seems to transgress whoever plays for them,’ he said.

‘When my brother Pat played for Harlequins they were forever this entertaining, chest out, London, City Boys side. That’s the stereotype, but they still are 20 years on.

‘Sale maybe because they’re unfashionable or haven’t had the investment others have had, because of where they’re based up north, seem to be this gritty, down-to-earth, hard-working side, and all the lads, even the World Cup winners like Faf de Klerk, and all the coaches certainly from a rugby league background, exude that as almost a badge of honour.’

He wants to subtly change that though. Winning, clearly, will help. 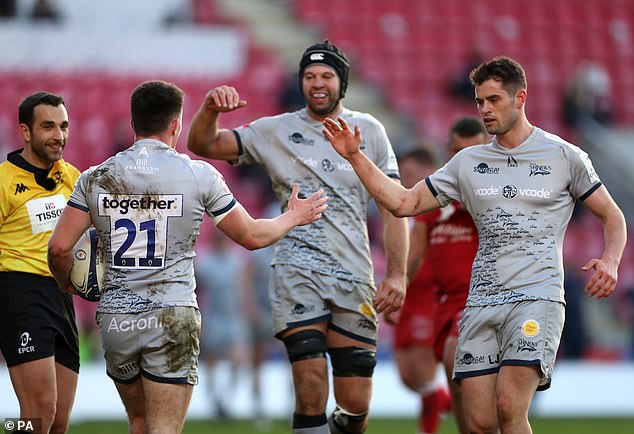 ‘We have no right to lay claim to being championship contenders because we haven’t proven ourselves have we?’ he says.

‘But if you are you have to step out of that persona of an underdog. It’s purely intrinsic, that emotion. It’s you against the world, the “they don’t think we’re good enough. We’ll show you” mentality.

‘When that tension, that label ceases to exist then what have you got? How are you going to motivate yourself?

‘When we are the underdogs I’ll use it, but at the moment this team feel like on their day they can take anyone on.

‘That’s not an underdog mentality, that’s an under-the-radar mentality. “Right, brilliant, we’ll use that as they don’t know we’re coming”.

Now with a beastly La Rochelle side run by Irish legend Ronan O’Gara up next Sale are ready to pit ‘goliath against goliath’ with their collection of South African monsters like Dan du Preez and Akker van der Merwe.

‘I was shocked when someone said: are you worried about physicality?’ he added.

‘Have you not seen us play? Are we worried? We’re relishing it.

‘If you are presented with that opportunity and you step back rather than step up, then you’re never going to get there.

‘Around this place, between the walls at Carrington, there is a real belief growing. We are bang up for it.’