It is the morning after Exeter’s victory over London Irish and Sam Simmonds can be forgiven for looking a little blurry-eyed. The team bus pulled back into town at 2.45am so there has been little time for sleep.

‘It was a pretty civilised bus journey,’ he says with a chuckle. ‘We’ve toned them down a bit. It’s not like when I was 18 and had to sing Justin Bieber up at the front. I had to drive back from the club, too.’

For now, the celebrations are on hold. The only sign of indulgence after breaking the Premiership try-scoring record is a congratulatory apple spice cake from the local bakery. 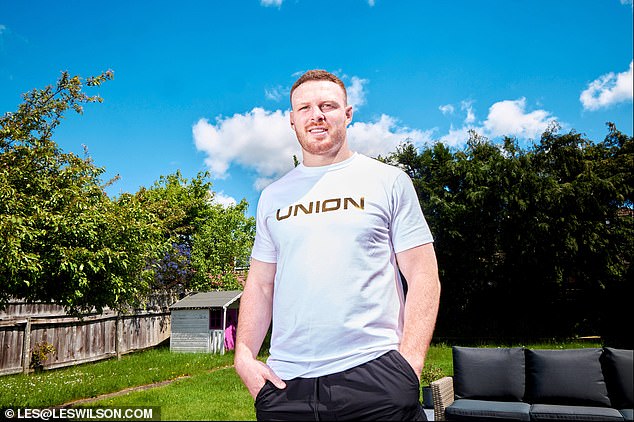 ‘It was amazing,’ he says, reflecting on the hat-trick that saw him beat Dom Chapman’s 23-year-old record. ‘I’ve always loved scoring tries, ever since playing on the wing for Teignmouth second team.

‘To see my name up there with guys like Thomas Waldrom, Christian Wade, Chris Ashton and Tom Varndell is unbelievable. Hopefully I can keep pushing on so no one can break it for a while. My dream was to play one Premiership game for Exeter… not all of this other stuff that’s happened.’

It has been a month to remember for the No8. There will be a few more sleepless nights to come as he recently discovered that his partner, Emily, is pregnant with their first child. On top of that, he was the headline inclusion in Warren Gatland’s Lions squad, having not been picked for England since March 2018.

Basking in the Devonian sun in his garden, which overlooks the hillside farmland where his coach Rob Baxter lives, he says: ‘It’s all come at once. I watched the Lions announcement at home by myself. My girlfriend had offered to take the day off to watch it with me but I told her not to in case I wasn’t in the squad. If you’re not being picked for your country, you naturally feel like you might not be in the reckoning for the Lions.

‘When they read the names out, they called out two other No8s — Jack Conan and Toby Faletau — before me and I was there thinking, “Ah, that’s it, game over”. So when my face came up on the screen, it was just so surreal. I was buzzing. People say I’m a bolter and that’s exactly what it felt like. My dad, brother and uncle Facetimed me straight away from Teignmouth. Dad had a few tears. 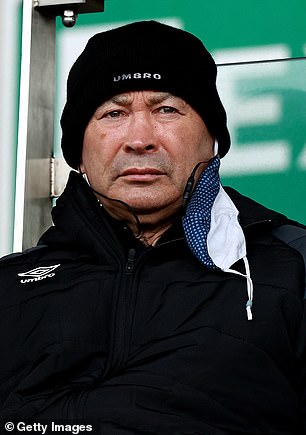 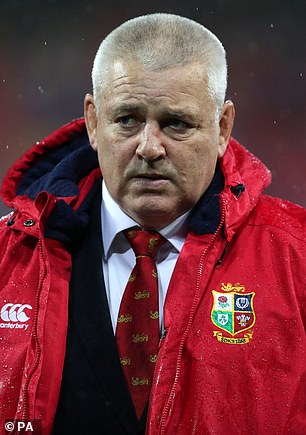 Eddie Jones (L) has snubbed Simmonds, but Warren Gatland (R) has picked him for the Lions

‘It was funny because everyone in contention had their photo taken in a Lions shirt during the Six Nations. I wasn’t involved in the Six Nations, so they had used a photoshopped image and stuck my head on someone else’s shoulders! Fortunately they didn’t use someone massive like Tadhg Furlong’s shoulders because that would have looked a bit weird! In a way, it was cool because it reminds you you’ve sort of come from nowhere.’

Simmonds is used to underdog stories. He became a household name in Exeter’s giant-killing rise in club rugby, while also battling his own issues with injuries, size and selection.

‘The first person I called was Jonny Hill. He’d told us all that he hadn’t received the email saying that he was being considered, so it was a bit of a shock for the rest of us! We joined the club at the same time and lived in the academy house together. Jonny was 6ft 7in, injured, skinny as a rake. I was in my second year at college and had told the teachers that I wanted to play on the wing because I was tiny and I couldn’t see how I was going to get a contract as a No8. We were both injured and it seemed like a crazy thought that one day we’d play for the Lions.

‘There were times when I was worried whether Exeter would keep me on, because I had been out on loan and I wasn’t getting picked in the Championship. Fortunately, Rob had faith in me and things worked out. Who knows what would have happened if he hadn’t? I would have stayed around rugby to see what offers came my way because I always backed my ability.

‘If it wasn’t for rugby, though, I don’t have a clue what I would have done. My dad has fishing boats, putting out pots around Weymouth and Alderney, so maybe I would have become a fisherman.’

Naturally, Simmonds’s dad cooked up a platter of lobster and crab to celebrate his son’s Lions selection. ‘Me and Jonny were involved in the England summer tour of South Africa in 2018 and there were five of us on the bench who didn’t get on. That was tough.

‘I was pretty upset at the time. Jonny was gutted too. It was a bit of a kick in the teeth because it felt like they didn’t have faith to put you on. Maybe they had other reasons for sticking with the players who were already on the pitch, but it feels like they don’t trust your ability to get on and close a game out. These things happen and it’s just about how you react. Look at what Jonny has achieved since: it did wonders for Jonny. We both reacted to it quite well.’

Simmonds’s reaction has won worldwide acclaim. His weight increased from 90kg (14st 2lb) to 106kg (16st 9lb), without losing his speed and he has become one of the most potent No8s in world rugby.

World Cup-winning All Black Jerome Kaino is among his fanclub. When he was named in Gatland’s squad, the well-wishing messages flooded in from everyone, from England coaches to Dan Carter.

‘My phone went mental,’ he says. ‘Getting messages from guys I watched like Jerome Kaino, Ardie Savea and Dan Carter was amazing. The fact Dan Carter just knows who I am is crazy. Growing up, I stayed at my dad’s house on Thursday night and would wake up at 6am to watch those guys playing Super Rugby on TV before school. I loved it. Just being mentioned by these guys is surreal.’ 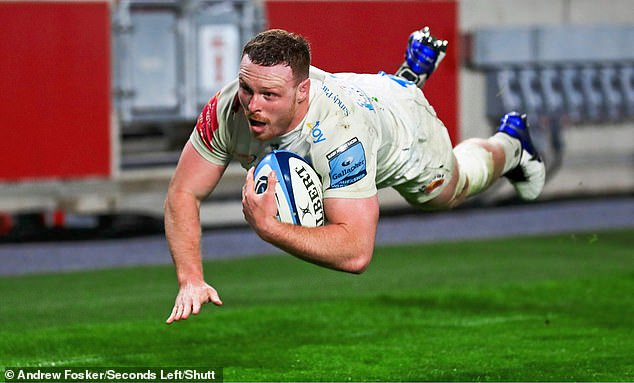 The Exeter No 8 is the Premiership’s record try-scorer, but hasn’t played for England since 2018

Did he hear from Eddie Jones? ‘Yeah, he sent me a text to say, “Well done”. Over the past few months, there has been more chat with the England set-up and that gives you some confidence. I was always hopeful that if I wasn’t selected by the Lions then I’d be involved on the England summer tour.

‘I was gutted not to be involved in the Six Nations but the positive is that my form has been good for Exeter and I’ve been playing in a winning team, which gave me the best possible opportunity to be picked for the Lions.

‘It’ll be great to right some of the wrongs of when I played international rugby in the past. I’m more mature and more physical now. I know how to train. When I was first involved, the England environment shocked me a bit. You live and breathe it for eight weeks straight at Pennyhill Park.

‘With club rugby, you go home at the end of the day. The intensity of it shocked me, but that was four years ago and I’m a different player now. I still want to play for England and be in contention for selection in the autumn. I’ve not been getting selected for England and I’ve made peace with that, but I still want to be a part of a successful England team.

‘I want to get back to playing for England. I feel like I could have a role to play in the England side and hopefully I can prove that in the summer.’

Gatland will be hoping that Simmonds’s dynamic attacking play will come to the fore in South Africa. His combination of power and pace could be the way to beat the big Bok beasts. 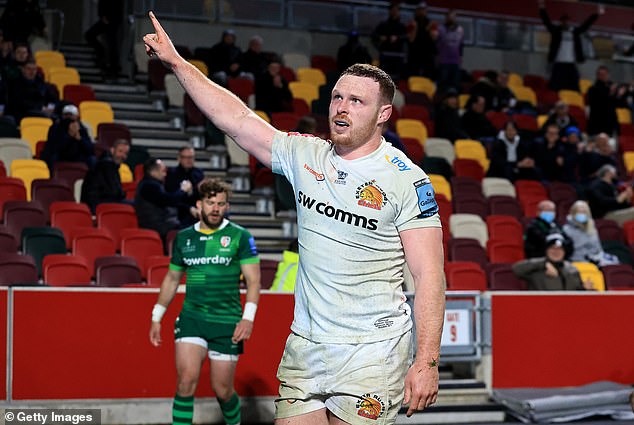 Despite being ignored for so long, Simmonds says he wants to ‘get back playing for England’

‘Warren Gatland said in his interviews that everyone will get a chance to play at the start. It’s up to me and everyone else to stake their claim. It’s bit of a fresh start.

‘Obviously some players have credit in the bank but I see it as an even playing field. You’ve seen the impact that guys like George North and Alex Cuthbert had on tours as relatively new guys. I’ve got a lot to do here with Exeter first, but once I’m in that environment then hopefully I get to put my stamp on it.

‘It’s a huge honour. Lions moments are iconic. All of the rugby club used to pile in at my dad’s house to watch the games. I’m proud of what I’ve achieved but I want to achieve more.