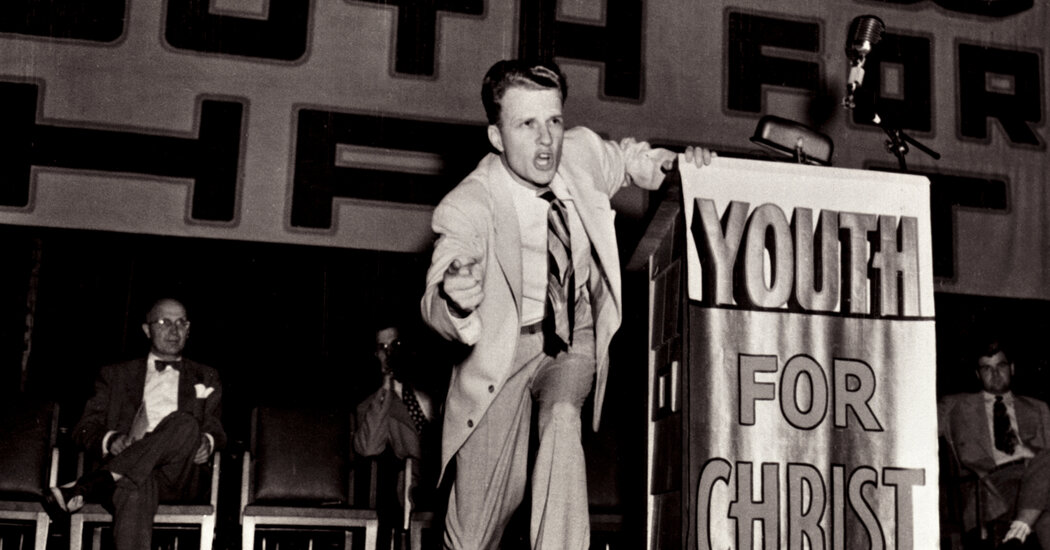 Tenacious and tireless, Billy Graham was blessed with what more than one observer called animal magnetism. When he died at age 99 in 2008, he was estimated to have preached in person to 210 million people.

He was also a savvy political player, and that’s the focus of the new PBS “American Experience” documentary, “Billy Graham.” Premiering Monday, the two-hour film, directed by Sarah Colt (“The Disrupted”), portrays a preacher drawn to power like a moth to a flame. After getting the cold shoulder from Harry Truman, a staunch believer in the separation of church and state, Graham went on to become a living, breathing seal of approval sought by every U.S. president until his death.

“He became an incredibly, tremendously powerful figure, a figurehead of the evangelical movement,” Colt said by phone from her New York office. “But it really was the intersection between him and political life, in particular the presidency, that was our focal point. We wanted to understand better what happened there, and what he did.”

Riding the anti-Communist fervor of the 1940s and ’50s, endorsed by the media tycoon William Randolph Hearst, Graham found himself preaching his distinctly American and capitalistic brand of Christianity to thousands, in venues from rural America to Madison Square Garden. He sought and won converts among secular audiences. He desegregated his events, which he called crusades, and invited a young Martin Luther King Jr. to appear with him in New York.

But as the civil rights movement picked up steam, he was largely silent. From an early stage, he knew it was conservatives who buttered his bread.

Colt discussed Graham’s promotional savvy, his political maneuverings and the U.S. president who broke his heart. These are edited excerpts from the conversation.

What set Graham apart from other public religious figures?

There are lots of evangelists in American history, and there are famous ones who attracted big crowds. But Graham was in a class of his own very, very early, and very quickly. His sense was, the more you can be part of the mainstream, and take advantage of print and radio and television and any kind of media, as well as politicians, then you’re spreading this message as far and wide as you can.

How did timing help him?

I think he was born at the right moment in the right body. He was tall. He fit a certain stereotype that was very popular, the majority vision of what a good-looking man is. And he had this kind of aura about him. He had the same qualities as a politician or a movie star. He’s from a dairy farm near Charlotte, N.C. He wasn’t poor growing up, but he wasn’t from a wealthy family. And he finds himself rubbing shoulders with the wealthiest people in the United States and with the Queen of England and Winston Churchill. He’s just mixing with society at the highest level, and he likes it. He’s good at it. He understands how to do it.

What makes Graham an important figure in 2021?

We’re always thinking about how history reflects on where we are today. That seems really relevant when you think about the power of the evangelical vote in presidential elections, and no election is more important to that than the election of 2016.

Was Graham of the religious right, or did he just influence its creation?

He was asked to join [the Rev. Jerry Falwell’s] Moral Majority, and he declined. But his fundamentalist religious beliefs remained. His theology never changed over the course of his career. He was preaching a message of Jesus Christ as your Savior from the beginning to the end, and he absolutely believed in that. But I think it became more nuanced for him.

He had a public image of nonpartisanship. He sought the approval of Democratic presidents as well as Republican. But the film seems to argue that he was, in fact, partisan.

He really comes onto the stage in the late ’40s with a very, very strong anti-communist message. That wasn’t necessarily partisan, but it was political. He was saying, We really need, as a country, to fight this communist scourge.

Then, he finds in Eisenhower a kind of partner. He and Eisenhower saw things very similarly in terms of their politics, and Graham was quite comfortable with saying he was nonpartisan in front of cameras but doing a lot of things behind the scenes that were quite partisan. So it’s an interesting sort of public-private thing that he did.

With Nixon it seems like there was more than a mere political alliance.

In some ways Graham and Nixon grew up together in politics and in the public eye. Just at the moment that Nixon becomes vice president to Eisenhower in ’52, Graham is emerging as this very, very famous American religious figure. By the mid ’50s, as the journalist Nancy Gibbs says in our film, Billy Graham is arguably the most famous man in the world.

So Nixon is vice president, and Graham is this evangelist that people recognize on the street, and they swarm him, he’s like a movie star. He and Nixon are figuring out this world of prominent national fame together, and they become friends. They really liked each other, and their politics did align. And when Nixon runs in ’68 and wins, that’s everything Billy Graham has been working toward, which is both to be close with the president and feel that he can influence the president.

Graham was one of the last people to see that Nixon was double-dealing and wasn’t who he appeared to be. He really got sucked in. He got kind of blinded by the whole thing. He made a big mistake staying so close with Nixon, right to the bitter end when other allies of Nixon knew that there was a major problem. And he stayed very close, and they remained friends. But Graham learned from the experience. Watergate changed how he saw his role as a religious figure and the power that he had and what he should do with it.

What did Graham do differently after Watergate?

He started doing more international crusades after that. And he made some very clear public speeches where he said he had made a mistake, and that religious people should not be publicly partisan. In 1980, he definitely wanted Reagan to win the presidency, but he supported him privately rather than publicly. He always said he didn’t endorse Nixon, but he really did.

How did he modernize fundamentalism?

In the beginning, he was part of the Youth for Christ group [founded in 1944]. They weren’t so strident, even though they were fundamentalists in how they saw the Bible. They were more inclusive, and they embraced youth culture. They had light-up bow ties and Olympic athletes at their events. They had a talking horse.

Why all the fun and games?

They did all this stuff to attract young people and make it more appealing. It was like: “Yes, you can wear makeup and you can be part of the world and get your hair done and wear nice, flashy clothes. And you can still believe in Jesus Christ.” And Billy Graham really becomes the figurehead of that movement because he’s so good at it. The modern evangelical movement sort of begins with that.