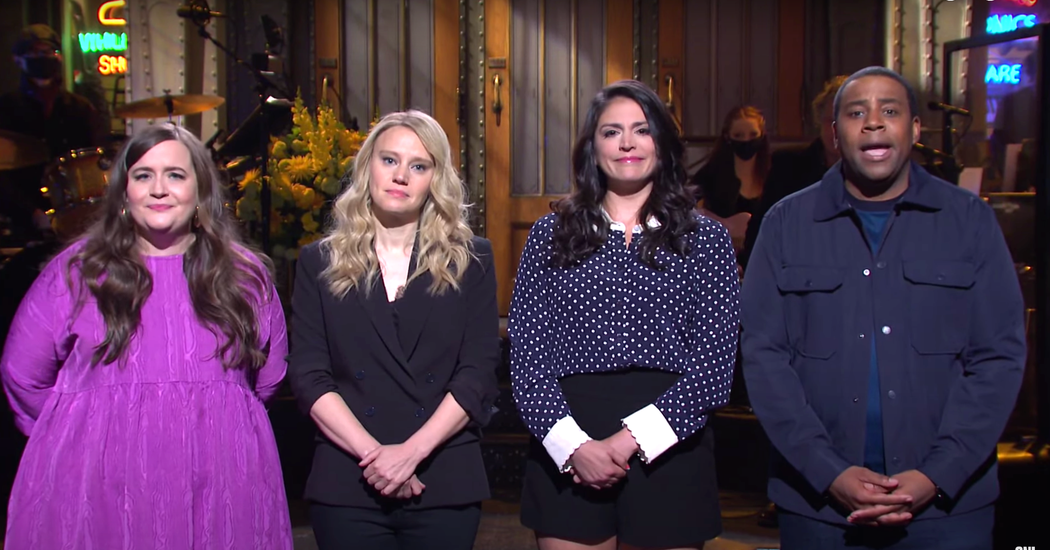 Just how unusual has the past season of “Saturday Night Live” been? For one thing, it opened its final episode without a traditional sketch and had its performers talk, in comedic but personal terms, about what it had been like to put on the show in the middle of a pandemic.

This broadcast, hosted by Anya Taylor-Joy and featuring the musical guest Lil Nas X, opened with the veteran cast members Aidy Bryant, Kate McKinnon, Cecily Strong and Kenan Thompson standing as themselves on the stage of NBC’s Studio 8H. “This year was crazy,” Bryant said.

Strong added, “So crazy it made a lot of us crazy.”

Another group of cast members observed that, at this time in 2020, “S.N.L.” had halted its live broadcasts and instead produced taped segments that the performers recorded in their own homes. But this year, they received different instructions from the show’s creator and longtime executive producer, Lorne Michaels.

Ego Nwodim said, “Everyone else was fleeing New York but Lorne was like, ’We should go back, for comedy.’”

McKinnon joked about the abundance of Covid protocols necessary to keep the show going. “If I wanted to hug anyone, I had to pull them into a closet and do it in the dark, away from the authorities,” she said. “That led to a lot of confusion.”

Chris Rock, the “S.N.L.” alum who hosted the season premiere in October, made a surprise appearance to observe that his episode felt “like six years ago.”

He added: “Here’s how messed up the world was when I hosted: I wanted Kanye West to be the musical guest. And he couldn’t do it because he was running for president. Also, the week I was here, the sitting president who said Covid would disappear got Covid. That was this season.”

The cast also acknowledged loved ones and colleagues who had died of Covid-19, including the show’s music coordinator Hal Willner.

Getting momentarily choked up, McKinnon said, “This was the year we realized we’re more than just a cast, we’re a family.”

Bryant added, “And like a true family, we’ve gotten sick of each other, and we need a little break.”

Strong offered her thanks to the audience “for staying with us through an election, an insurrection and an objection that there was an insurrection.”

Weekend Update jokes of the week

Over at the Weekend Update desk, the anchors Colin Jost and Michael Che continued to riff on recent news events in the retrospective mood of the show.

Well, it is our last Weekend Update and I have to say, I think that the country is in a better place than when we started this season. In September, there were headlines like, “Will the President Destroy Democracy?” And now I’m seeing headlines like, “Will This Be the Most Turnt-Ass Summer Ever?” And who can forget that time when the President tried to murder Congress?

Republicans just want to forget the riots ever happened and focus on the future of their party. And the future of their party is, of course [an image appeared of Representative Matt Gaetz of Florida] … yikes. It was reported that federal authorities investigating the sex trafficking accusations against Matt Gaetz have secured the cooperation of his ex-girlfriend. But not until after her prom.

Che turned his attention to other recent events:

In the wake of the cease-fire agreement between Israel and Hamas, insiders praised President Biden’s “light touch” when dealing with Benjamin Netanyahu. But in fairness, everything Biden does involves some kind of touch. [Here the screen showed a composite image of instances of President Biden kissing, hugging and rubbing the shoulders of women.]

Pete Davidson returned to the Weekend Update desk with a short monologue about Mental Health Awareness Month and how the pandemic had affected his anxiety. When he started wearing a mask, he said: “I figured less people would recognize me. But it didn’t work because everyone can still recognize me from my eyes. If you see someone who looks like he just woke up and he hasn’t slept in days, it’s me.”

Davidson also observed: “I can’t start being afraid public restrooms would give me Covid when I was already afraid they would give me AIDS.” Playing off the reaction to that joke, he said: “Hey, AIDS is a lot like ‘S.N.L.’ It’s still here, it’s just no one’s gotten excited about it since the ’90s.”

He added, “Lorne actually wrote that.”

If you’re a reader of tea leaves, we’ll note that Davidson (who just finished his seventh season on “S.N.L.”) concluded by telling viewers, “I’m very grateful to be here, and it’s been an honor to grow up in front of you guys, so thanks.”

Other Weekend Update deskside segment of the week

Strong closed out the final Weekend Update of the year by reprising her recurring role as Jeanine Pirro, the Fox News host.

Brandishing a wine glass that she used to toss her drink in all directions, Strong said she had recently made a visit to Mar-a-Lago: “It’s like being on a cruise ship that’s permanently docked in the hottest part of Florida, in between two classy strip clubs. You know, where the gals wear ball gowns.”

We’ll just add here that Strong, who completed her ninth season on “S.N.L.,” finished her segment by singing “My Way” as she submerged herself in a glass tank labeled “Boxed Wine,” complete with a giant straw.

Pride tutorial of the week

Since last year’s public Pride events were largely canceled because of the pandemic, “S.N.L.” was here to remind us how it should be properly observed in 2021 with a helpful music video, in which a group of cast members including Punkie Johnson, McKinnon and Bowen Yang sang:

It’s a celebration of overpriced bar drinks, crushes who don’t return your interest and — in the case of characters played by Taylor-Joy and McKinnon — lesbians who moved in together way too fast.

Musical performance of the week

Lil Nas X has already expertly courted controversy this year with his kaleidoscopic video for “Montero (Call Me by Your Name)” — the one that had him sliding a stripper pole down to hell and grinding up on the devil — and a set of limited edition sneakers called Satan Shoes.

Now his live staging of “Montero” has given “S.N.L.” its most fetishistic, neck-licking-est — and most proudly gay — musical number in … maybe, ever. And he bravely persevered after ripping his pants in mid-performance, as he later acknowledged on Twitter.