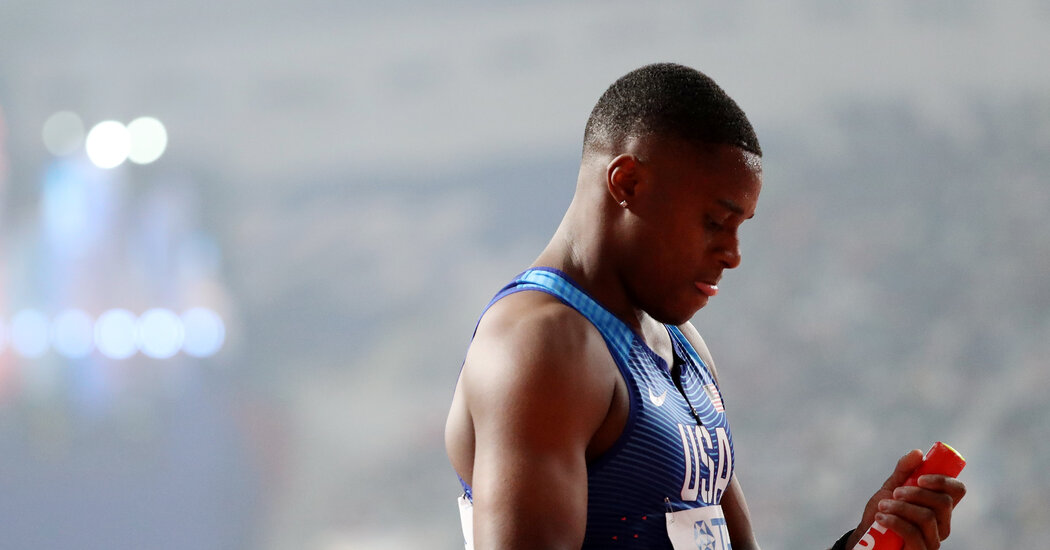 Christian Coleman, the reigning world champion in the 100 meters, will miss the Tokyo Olympics this summer after the top judicial body in sport punished him with an 18-month ban from competition for missing three doping tests within a year.

The penalty, handed down by the Court of Arbitration for Sport in Switzerland, is a major blow for Coleman, 25, a rising star in track and field and the best hope for the United States to win a gold medal in an event that Usain Bolt, who is now retired, dominated for a decade.

The start of the ban was backdated to May 14, 2020, which means it will run through mid-November. The Athletics Integrity Unit, which handles antidoping discipline for World Athletics, the sport’s governing body, originally suspended Coleman for two years. The panel for the sports court reduced the sentence by six months because it found “the athlete’s degree of negligence to be lower than that established in the Challenged Decision.”

“For an athlete who believes wholeheartedly in clean sport, and who has competed cleanly my entire life, this decision is disappointing and frustrating to say the least,” Coleman said Friday afternoon. He pledged to be more diligent about adhering to his whereabouts filings and pull hard for those who make it to Tokyo.

“I will be rooting for them to represent our country well and bring home as many medals as possible,” he said.

Coleman, who won the gold medal in the 100 meters at the 2019 World Athletics Championships when he ran 9.76, plans to compete during next year’s indoor season and defend his world championship next year in Eugene, Ore.

His case shows how substantial penalties can be even for athletes who do not test positive for performance-enhancing drugs.

Coleman has never failed a drug test. He was tested 13 times in 2019, and antidoping officials have said they have no reason to suspect that he uses performance-enhancing drugs. But three times in 2019 Coleman was not where he said he would be during the one hour each day when antidoping officers were supposed to be able to test him.

The rules require athletes, at the beginning of each quarter, to give antidoping officials a schedule of where they plan to be each day for the next three months. Athletes can update their files as their plans change, but they must specify one hour each day when they will be at a certain location, sometime between 5 a.m. and 11 p.m. local time.

If a doping control officer shows up during that hour to collect a urine or blood sample and the athlete is not there, it counts as a missed test. Officers must make a “reasonable attempt” to locate the athlete during that hour, though a phone call is not mandatory.

Coleman’s final strike occurred on Dec. 9, 2020, when two doping control officers arrived at his home in a gated community in Lexington, Ky., at 7:09 p.m. Coleman had said he would be home from 7:15 p.m. to 8:15 p.m. Instead of calling Coleman’s home on the security keypad, which Coleman contended he would have heard, they walked through an open gate and knocked on his door.

Coleman did not answer. The officers waited for an hour and left.

Coleman testified that he was out Christmas shopping and picking up a takeout meal near his home during the hour and that if a doping control officer had called he could have gotten home within five minutes, even though that is not how the process works.

In a statement, the court noted that Coleman should have been on “high-alert on that day, given the two existing whereabouts failures against him.” The court said, though, that if the officers had called Coleman, he would have been able to return home within the 60-minute window. A phone call, the panel noted, is “a matter of standard practice among other Doping Control Officers.”

Coleman’s absence creates a wide-open race for the three American spots in the 100-meter field at the Tokyo Games, which is always one of the toughest events to qualify for from the United States. Justin Gatlin was the last champion from the United States in the event, in 2004, but Gatlin has sullied that gold medal with two bans for doping during his career.