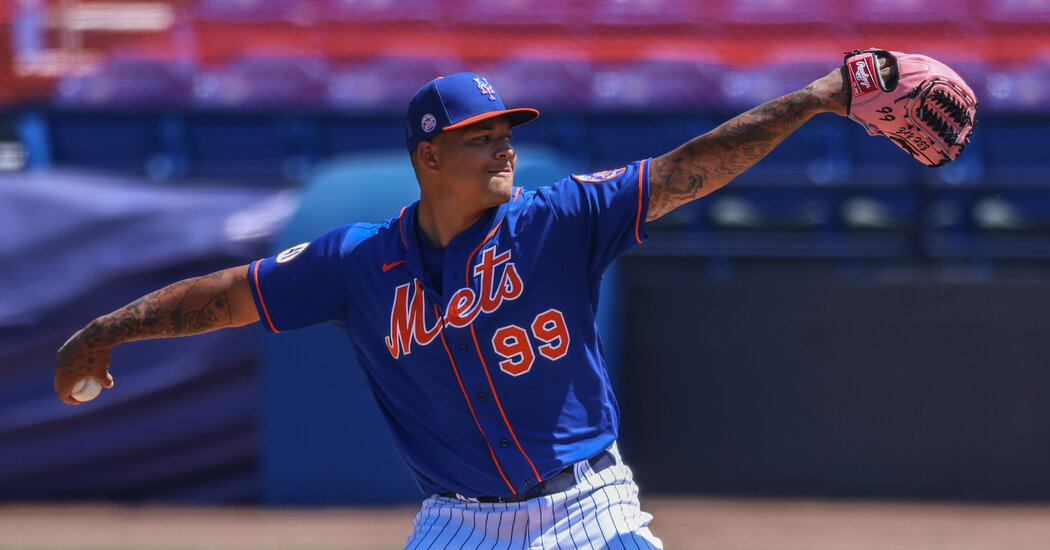 Taijuan Walker twirled four shutout innings in his second start of the spring last week. He also made some digital history.

The recently signed Mets right-hander became the first known active Major League Baseball player to enter the nonfungible token (NFT) arena, auctioning a piece of original artwork on OpenSea, a marketplace for digital goods. Walker’s one-of-a-kind art, a baseball card-esque image of him tricked out with neon colors and an animated, flashing signature, sold for 2.35 Ether — roughly $4,275 — after receiving six bids. The proceeds from the auction benefited the Amazin’ Mets Foundation, the team’s charity.

“I really wasn’t expecting nothing,” Walker, 28, said in a phone interview. “For it to sell like that, it was really cool and definitely a blessing.”

While a first in baseball, Walker’s NFT venture is just the latest example of an ongoing crypto craze. The boom reached its current peak earlier this month when a JPG file created by Mike Winkelmann, the digital artist known as Beeple, was sold for $69.3 million in a Christie’s online auction, setting a record for artwork that exists only digitally.

The rock band Kings of Leon recently released an album by way of digital tokens. Jack Dorsey, the chief executive of Twitter, made headlines on Monday, selling an NFT version of his first tweet for $2.9 million. And basketball fans have recently been consumed by NBA Top Shot, a marketplace for buying and selling digital highlight clips.

M.L.B. is also working on its own NFT products, according to ESPN, but Walker beat the league to it.

While Walker was not as flashy an off-season acquisition for the Mets as shortstop Francisco Lindor, he is expected to play a large role for the team after signing a two-year deal in February. He thrived in the pandemic-shortened 2020 season, with a 2.70 earned run average in 11 starts split between the Seattle Mariners and the Toronto Blue Jays. He is expected to begin the season as the Mets’ No. 3 starter behind Jacob deGrom and Marcus Stroman now that Carlos Carrasco is out with a hamstring injury.

Walker’s interest in NFTs developed when Jarrett Burgess, a friend and former teammate in the Mariners organization, brought them to his attention. While Walker worked his way up to the majors, Burgess earned his business degree and took computer classes at Purdue. He went on to land a consulting job at Oracle, where he worked with cloud and blockchain technology.

That work with blockchain led Burgess to NFTs, where he finds himself breaking new ground while also having to explain to some consumers what they are paying for when they purchase one.

At their most basic level, according to Burgess, NFTs are digital assets such as images, GIFs, songs or videos that are uploaded and stored on a blockchain. “It’s immutable and it’s verified,” he said. “Unchangeable for all of eternity.”

Or, as Walker put it: “It’s yours forever. It can’t be chewed up by a dog or stolen from you.”

The impossibility of physical wear and tear is one appeal of digital collecting. The same goes for NFTs doubling as proof of ownership. For those who collect sports memorabilia, think of an NFT as a piece of memorabilia that doubles as its own certificate of authenticity.

With their shared interest in the medium, Walker and Burgess decided to pursue creating an NFT, with Burgess, along with a few people from Walker’s agency, spearheading the creative process. Walker signed off at various design points along the way, all the while concentrating on his day job.

“My main focus right now is baseball, so I’m focused on spring training stuff,” Walker explained. “I have a team that helped me create it. We just wanted something bright, colorful, vibrant, neon lights. Something that would stand out. It was the first one that we did. It was quick. But I’m still building a team to help me do this. We’re going to have multiple NFTs come out this year.”

The lack of anything tangible can lead to confusion for some, yet NFTs are routinely selling for thousands, and in some cases millions.

“Beauty is in the eye of the beholder,” Burgess said of the growing market.

While many try to wrap their heads around the concept of NFTs, some are already looking into how they can evolve. Among the latter group is Jack Settleman, the founder of SnapBack Sports, who, along with friends and family doubling as shareholders, spent $50,000 on a LeBron James Top Shot NFT in January. Settleman views the Top Shot as a “personal investment” in an ever-shifting world that increasingly embraces virtual and augmented reality.

“If you want to talk long term, I think we’re going to live in some sort of a metaverse to a degree where V.R. and A.R. are going to become huge parts of our lives,” Settleman said, describing a world where you can watch highlights with a front-row perspective from your living room couch. “You’re going to get home and you’re going to throw on the headset. Now you can walk through my Top Shot gallery. While you can’t touch anything today, in the future you’re going to be able to see it. It’s going to be more immersive.”

Settleman and Burgess spoke of other possibilities, like your favorite musician or athlete minting an NFT that would grant you direct access to them, or tickets to their next event. Or the opportunity for artists to collect limitless royalties and commissions when their work is sold over the years.

Settleman and Burgess believe NFTs are an inevitable part of the future, even if the value behind them isn’t always easy to explain.

“Oftentimes, when people get questioned why they love something, can they explain it? Oftentimes, no,” Burgess said. “It’s the same connection with NFTs. Is there a direct explanation for it? No, but there is value in it.”

As for Walker, he’s still learning, but he thinks the potential is “unlimited.” He’s confident people will continue to collect physical memorabilia, but he relishes the ability to add the personal touches made possible by NFTs. He floated the idea of making digital copies of his intimate big-league keepsakes, like the first ball he’ll throw in his regular-season Mets debut.

“It all happened so quick,” Walker said of his first NFT, “but there’s just so much more we can do and that we’re going to do.”