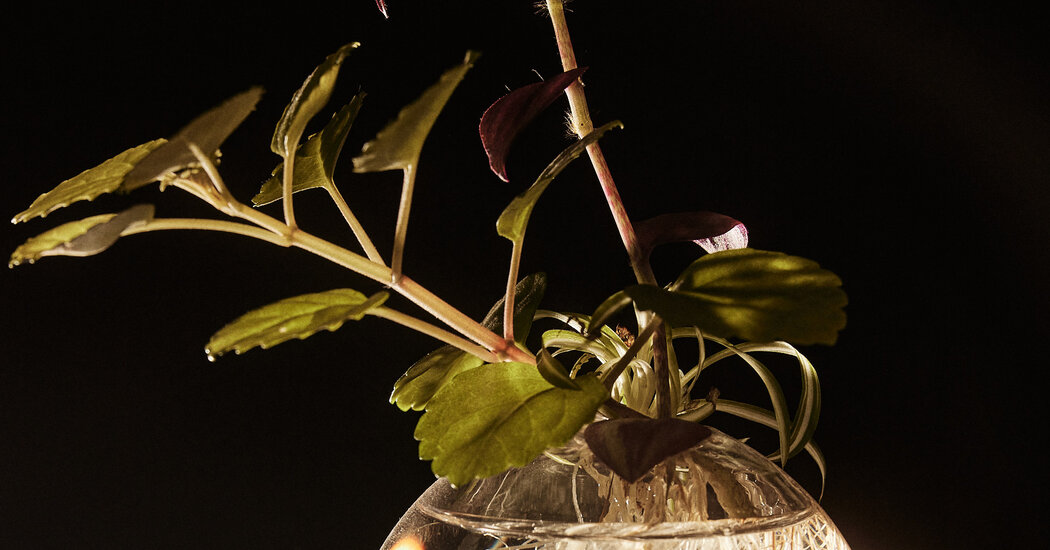 Dan Jones is creating a rainforest in his apartment in Newcastle-upon-Tyne, England.

Though there are more than a dozen plants of varying texture, scale, appearance and color, the rainforest is neatly nested within a 15-liter glass jar.

Since September 2019, Mr. Jones, a digital public relations professional, has constructed terrariums and chronicled them on his blog, Terrarium Tribe, as a way to exercise his green thumb in a small space. When the pandemic began, the hobby became a way to fill his time at home.

Terrariums are appealing because they “lie at the intersection of gardening, arts, craft and science,” Mr. Jones, 31, said. “They are literally living art.”

While Mr. Jones is now able to fashion a thriving terrarium, his journey has consisted of much trial and error and more than one plant funeral. He said that in his first seven months of blogging he saw “pretty much zero” traffic, but within days of the March 2020 lockdowns, his site began receiving thousands of clicks daily. He has since had about 50,000 unique visitors a month, he said.

The terrarium is a successor to the Wardian case, which was originally developed during the early 1800s. Named for Nathaniel Ward, the English botanist who realized that if well-sealed, the planting vessel would be able to generate a small scale water cycle. The discovery made it possible to ensure that flora shipped by boat across the globe would still be alive on arrival.

The enclosed nurseries first saw a boom as a home decoration among Victorians, had a revival in the 1970s, and have again seen new waves of interest in recent years, partly because they look good on social media platforms like Instagram and Pinterest.

While the popularity of terrariums has been on the upswing for several years, Andrea Metzler, owner of Art Terrarium in Des Moines, estimates they’ve seen at least a 50 percent increase in terrarium sales since March 2020, compared to the same time the previous year.

Even though Art Terrarium operated on a curbside pickup-only model throughout last spring, April and May 2020 were the highest earning months in the nearly four-year history of the business.

For these customers, Mr. Ade packages plants and mosses that co-habitate well with soil, rocks and activated charcoal, along with a link to a prerecorded online tutorial for setting it up. But how the terrarium is designed, what kind of glassware is used, and what flare is added (ranging from bits of wood to crystals to figurines like dinosaurs), is all subject to the customer’s creativity.

Mr. Ade thinks the recent popularity is due, in part, to the ability to actualize something that’s protected and dependable in these uncertain times.

“I think the reason D.I.Y. stuff has taken off recently is that people like having an activity or an experience that they can have ownership of,” Mr. Ade said.

Stephen Hill, general manager of Sprout Home in Chicago, echoed that sentiment, saying, “You are designing this little world where you are in charge, you are the creator, you are the landscape architect or whatever you want to title yourself. The sky’s the limit.”

Another draw is the relative ease of maintaining terrariums compared to traditional houseplants.

While the water used in potted plants evaporates into the air, requiring frequent waterings, terrariums are different in that they are self-sustaining ecosystems. As Mr. Jones notes in his blog, terrariums are designed to “replicate all the necessary natural cycles for a thriving community of organisms,” without much outside human influence.

If the container is completely sealed, the water evaporates and captures on the side of the glass. Eventually the condensation gets heavy and falls back on the plants, effectively raining on itself. However, this system only prevails in strictly airtight receptacles. (In recent years, “terrarium” has become a shorthand for any glass vessel that holds plants, though technically the open-topped orbs and yawning geometric-shaped glassware that dominate Etsy are called “dish gardens” and function more as an eye-pleasing container than an actual tool for keeping plants alive.)

Depending on how tightly sealed the vessel is and how much sunlight it receives, the plants can survive anywhere between two months to a year without additional water, according to Mr. Jones and Mr. Ade. But, as Mr. Hill notes, while terrariums provide a more forgiving environment for plants, they, like any other plant, require natural light and a degree of know-how.

“Terrarium ecosystems really can go the distance if you balance everything perfectly,” Mr. Jones said. “There are terrariums out there that have been sealed up for over 50 years and are happily going strong.”