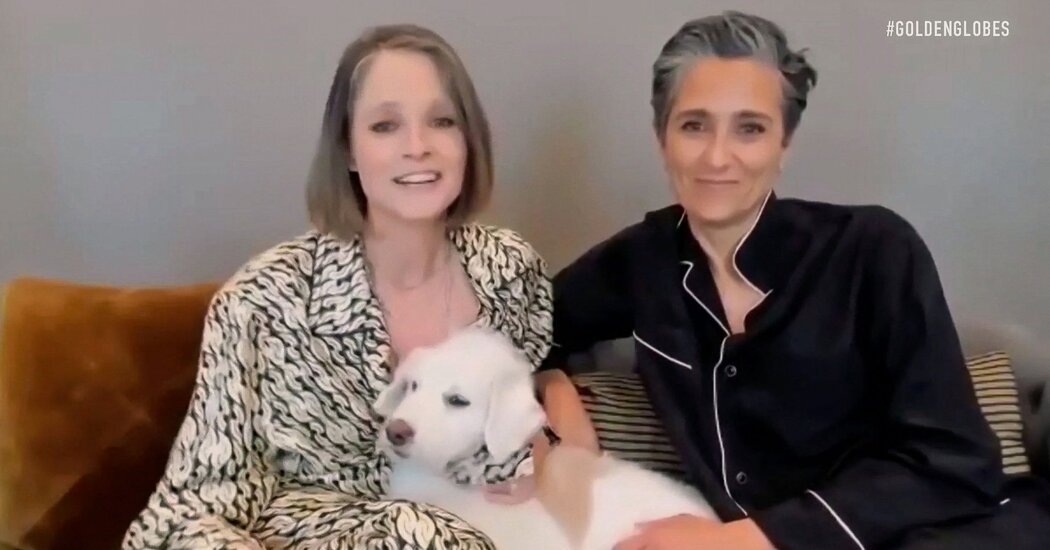 Even at the best of times, making an award acceptance speech isn’t easy. It’s the most scrutinized moment of your career, you’re bound to forget the name of somebody you love, and you’re five feet from a trigger-happy orchestra that is trained to turn on you like a firing squad.

Still, the upside is major. If you give a wonderful speech at the Golden Globes, that good will is rolled into subsequent award shows, potentially endearing you to voters, who may pick you in part because you delivered a moment. And some speeches even outlast the performances themselves: When you think of Jack Palance in “City Slickers,” his one-armed push-ups on the Oscar stage probably come to mind before a single joke from the movie.

All this is to say that the fine art of an acceptance speech got much trickier during the pandemic, when shows went virtual and winners were asked to direct their excitement toward the impassive eye of their MacBook webcam — a task that is a bit like performing stand-up to an empty club: There’s no crowd to carry you, to laugh or to applaud.

Still, some stars managed to make the most of it. Here are six people who mined unexpected levels of emotion and humor from a remote format practically designed to stamp all of those good things out.

Please welcome to the stage … Yuh-Jung Youn, roast comic? The 73-year-old may be on the verge of winning the supporting-actress Oscar for her performance as the grandmother in “Minari,” but if Youn is looking to do some pandemic-era moonlighting, she could easily embark on a second career as a Zoom comedian.

For proof, look no further than last weekend’s BAFTAs, where a surprised Youn routed the rest of her category and declared, “I’m very honored to be nominated — no, not nominated! I’m the winner now.” After expressing her condolences to the ceremony’s British voters for the recent death of Prince Philip — which drew an audible “aww” from her remote audience — Youn went in for the surprise kill: “Every award is meaningful,” she said, “but this one especially, recognized by British people — known as very snobbish people.”

The presenter David Oyelowo doubled over in laughter: Had she really just said that? It was a delightful echo of Youn’s “Minari” character, who is blunt but oh so endearing. Few people would dare show up to an awards show and tweak the voters to their faces, but now that Youn has managed it so well, have we as a society finally progressed past our need for the awards-show staple Ricky Gervais?

I’ve perused enough Architectural Digest spreads, Vogue.com videos and Instagram feeds to know that most celebrities live in what could charitably be described as fancy mausoleums. Yes, money can buy you a white-marble kitchen island the size of France, but can the bland, burnished lifestyle of the ultrawealthy confer true happiness?

That’s what took me off guard when Jodie Foster won her supporting-actress Golden Globe for “The Mauritanian”: She wasn’t expecting the win, and I wasn’t expecting her to present such a homey, recognizable vision of domestic bliss. Foster and her wife, Alexandra Hedison, accepted the award from their pillow-strewn couch, where they were happily curled up in pajamas. They laughed, they cheered, they hugged their dog. This is also what I do during awards shows!

Forced to improvise a speech, Foster began to thank her wife, “Ziggy and Aaron Rodgers” — a random list of citations far better than anything she could have read off a crumpled piece of paper. (For the record, Ziggy is Foster’s dog, and Rodgers is the quarterback-slash-“Jeopardy!” guest host who is dating Foster’s “Mauritanian” co-star Shailene Woodley.) But the biggest takeaway was this: After a tumultuous life and a tortured coming-out speech at the Globes several years ago, Foster is now 58 and content. Knowing how hard-earned that all was felt more momentous than her actual award.

Two years ago at the Oscars, I was marooned in an upper balcony, seated near Rami Malek’s mother and twin brother. Though Malek mentioned them during his acceptance speech for “Bohemian Rhapsody,” he would have needed a telescope to actually spot his family from the stage. This is one of the few advantages a Zoom awards season can actually provide: The winner’s loved ones are often right beside them, and it’s their reaction that can matter most.

When the “Minari” director Lee Isaac Chung won the Golden Globe for foreign-language film, his young daughter clambered into his arms. “I prayed!” she said, adorably thrilled by her father’s victory. “This one here, she’s the reason I made this film,” Chung said. And now, because of this crazy, mixed-up year, she’s part of a sweet moment that the two will always share.

The “Nomadland” director Chloé Zhao has taken nearly every directorial award available this season, and she’s used her speeches to thank the people who helped make and starred in her road movie. But when Zhao won the top award from the Directors Guild of America, she spent most of her moving speech on an off-the-cuff ode to the other filmmakers who had been nominated.

“You are so brilliant, so daring, and you’re in such control of your craft,” Zhao told Emerald Fennell, the director of “Promising Young Woman.” Both Lee Isaac Chung and Aaron Sorkin put their hands over their hearts as Zhao paid tribute: She talked about how Chung’s “Minari” had touched her on a personal level, and she called Sorkin, who directed “The Trial of the Chicago 7,” a poet.

When it came time to extol the virtues of the “Mank” director David Fincher, Zhao bowed to him: “Your film is a master class,” she said. “All your films are.” Generous and classy, Zhao’s praise was a reminder that awards season needn’t just be a competition — instead, it can be a celebration.

In the rare event of a posthumous win, the trophy is usually collected by the presenter or the director of the film. Instead, throughout this season, most of the awards given to Chadwick Boseman, for his role in “Ma Rainey’s Black Bottom,” have been tearfully accepted by his widow.

Simone Ledward Boseman made her first emotional speech at the Gotham Awards in January, where she appeared by video after a tribute to the actor. “It is my honor to receive this award on behalf of my husband, an acknowledgment not only of his profound work but of his impact on this industry and this world,” Ledward Boseman said, trying with admirable grace to keep her composure.

Then, instead of speaking to the voters, she began to address her late husband. “Chad, thank you,” Ledward Boseman said in a quavering voice. “I love you. I am so proud of you. Keep shining your light on us.”

When the “Minari” star Alan S. Kim won the Critics’ Choice Award for best young actor, the 8-year-old launched into a scripted list of thank-yous with child-actor élan. Then came a surprise: “Oh my goodness, I’m crying,” Kim realized. And the more he talked, the more he cried. “I hope I will be in other movies,” Kim finally said through tears, before bending over and murmuring to himself, “Is this a dream? I hope it’s not a dream.”

Look, I sometimes have reservations about what we put child actors through: Is it ethical to make a person so young earn a professional living? Doesn’t it force them to grow up too fast? But Kim, in his miniature tuxedo, let all that adult-before-his-time professionalism slip away and simply cried like any child would upon receiving a wonderful gift. It was surprising, authentic and moving. When it comes to awards-show speeches, you can’t ask for more than that.