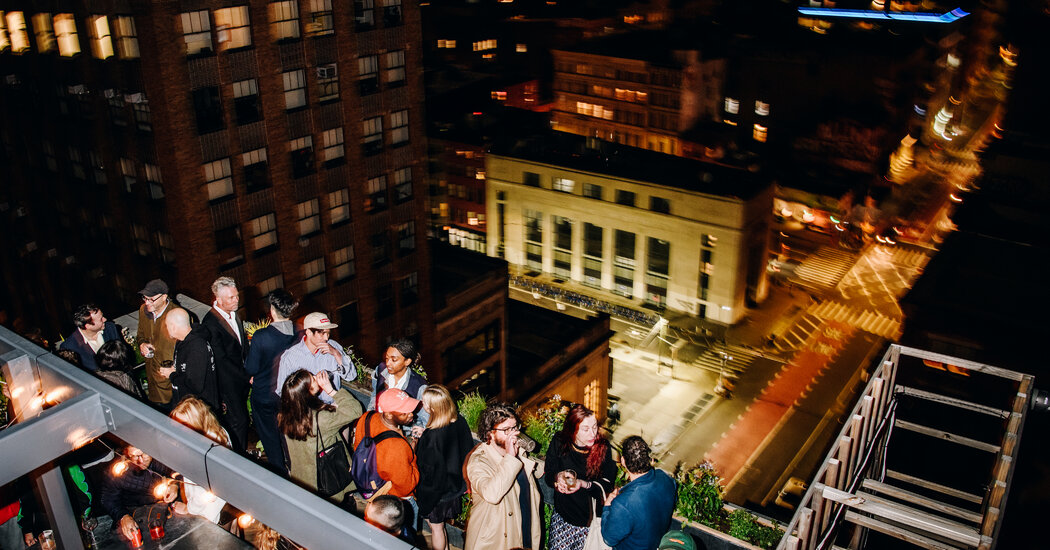 Nouriel Roubini, the economist who in 2007 became known as Dr. Doom after predicting the collapse of the housing market, actually sounded ebullient about the future of New York City Tuesday night.

“I’m reasonably optimistic,” he said, standing in the cavernous living room of his East Village triplex. “I was walking around my neighborhood this weekend. Every restaurant was open, I hadn’t seen so many people since before Covid.”

It was the evening before Frieze New York opened (the first in-person art fair in Manhattan since the start of the pandemic) and Mr. Roubini was hosting a party was for his best friend, Shai Baitel, who in January was named the artistic director of the Modern Art Museum Shanghai.

Guests were greeted downstairs by young publicists in masks. Upstairs, Mr. Baitel could be heard talking about the strange dynamics of being hired for his new job on Zoom, and mounting exhibitions virtually.

For a moment, at least, it almost felt like the pandemic had vanished.

Bartenders poured Champagne and white wine. Waiters circulated with canapés of roast beef and cod. Video of Bob Dylan, part of an exhibit, was projected on the walls. Lululemon sweatpants had been traded for Rachel Comey dresses and Maison Margiela sweaters.

The guests — which included the artist Andres Serrano, the fashion editor Lynn Yaeger and the art collector Robbie Antonio — gathered on the large balcony mostly mask-free, and seemed not to have quarantined so much as cocooned.

That included Mr. Roubini, who a year ago began exercising vigorously and learned to cook. “Shaksuka,” he said, referring to the spicy tomato-and-egg stew, “with salmon.” It was a wonder, he added, what not living out of a suitcase or eating out will do to a man’s waistline: “I lost 35 pounds!”

Anthony Haden-Guest, the nightlife fixture, accomplished a different feat: learning to fetch his own coffee at his local 7-Eleven, although he said this took some help from a “valiant guy from the M.T.A.”

And Destinee Ross-Sutton, a 25-year-old gallerist who specializes in Black contemporary art and opened her gallery, Ross-Sutton on Wooster Street in December, happily discussed the results from her inaugural show, “Black Voices: Friend of My Mind.”

The art world is seemingly on fire.

While the broader economy has skewed toward the rich getting even richer, collapsing real estate prices in Manhattan have made for opportunities for scrappy newcomers, especially in upscale enclaves like SoHo and TriBeCa.

“So many places have opened because of low rents this past year,” said Nate Freeman, a writer for Artnet who also hosted a Frieze kickoff party on Tuesday night, at a new rooftop bar called Happy Be on Cortland Alley.

He was chatting with Jordan Barse, who recently opened her gallery Theta on Franklin Street in TriBeCa, after closing one in the Ridgewood section of Queens. Nearby was the designer Cynthia Rowley and her husband, Bill Powers. Chloë Sevigny had just departed, after dropping by with her baby son, Vanja Sevigny Mačković, who defied the pandemic birthrate decline by arriving last May.

Daisy Prince, the former editor of Avenue Magazine. arrived around 11 p.m., looked at the crowd of about 100 and said, “Wow, are we just going to pretend nothing happened?”

Ms. Prince was smiling, but not entirely kidding.

Still, the fair itself was hardly business as usual.

To gain admittance at the Shed at Hudson Yards, visitors had to fill out an online questionnaire and upload their proof of vaccination or negative Covid test results before receiving a QR code. There were no exceptions. Even Michael R. Bloomberg, whose name graces the building, got stuck outside until he provided the proper documentation.

Instead of a Black Friday-style rush at Wednesday’s opening, V.I.P. collectors were staggered throughout the five-day fair (which ends Sunday). Timed-entry tickets and QR codes were checked at least four times. And numerous guards were on hand to enforce indoor mask wearing.

There were some whispers about whether it was too early to start partying, including from the very people hosting the events.

“Our publicists, our H.R. people were like ‘Don’t do this,’” said Josh Wyatt, the chief executive of CultureWorks, which formed from the recent merger of NeueHouse and Fotografiska, a photography museum on Park Avenue South. He held a dinner for 75 on Wednesday at the museum’s Veronika restaurant, which included Antwaun Sargent, a director at Gagosian who co-hosted the party, and JiaJia Fei, an art-world strategist. Most guests dined maskless after having their temperatures taken.

But Mr. Wyatt believed it was a civic duty to help New York recover, bringing people back together and fighting against another major enemy of 2020: hibernation.

“Netflix, Xbox, TikTok,” said Yoram Roth, a co-founder of CultureWorks, as waiters passed out ravioli, salmon and roast chicken. “We’ve got to get people off the couch.”