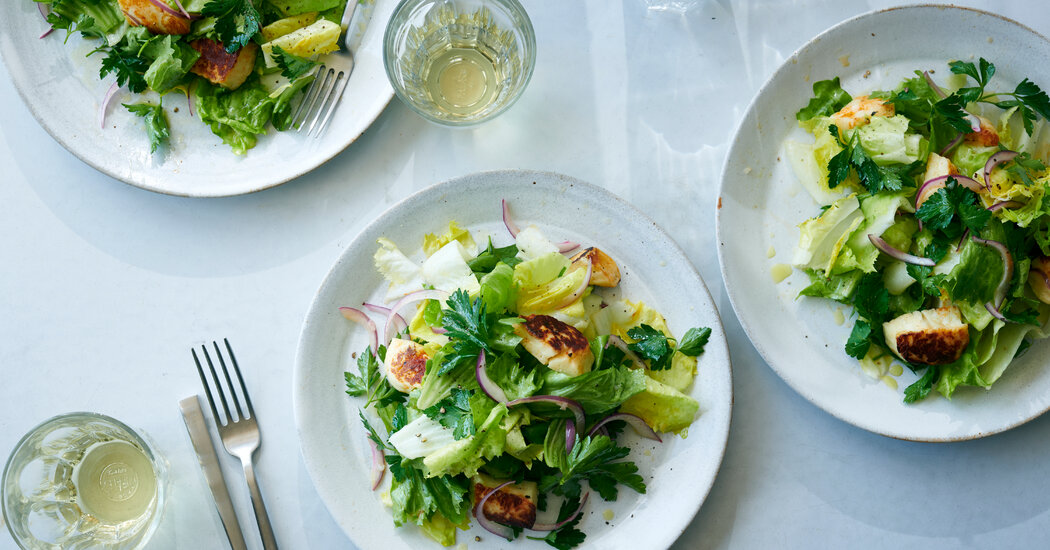 Baked feta may be having a moment, but it’s got nothing on a slab of halloumi seared until golden, crisp and slightly melted.

A mild, firm Cypriot cheese traditionally made from a combination of sheep and goat milk and submerged in brine, halloumi has a higher melting point than many other cheeses. This makes it ideal for any fiery encounters: whether fried in a skillet, seared on the grill or flambéed in a saganaki, a small pan with two handles that’s also the name for the cheese dish cooked in it.

High heat unlocks the best of halloumi’s tangy, salty nature, turning a rubbery cheese into something gorgeously bronzed on the outside, and soft within, with the texture of a molten marshmallow just before it gets squished into a s’more.

Seared halloumi makes an excellent appetizer on its own, but I love it tossed into a salad, where fresh greens — preferably bitter, bracing ones — can contrast with the oily richness of the cheese.

For this recipe, I cubed the halloumi before pan-frying it. This gives it more surface area, meaning greater caramelization and crispier edges. Another upside: The small, golden cubes mingling with the leafy greens resemble croutons, but offer a springy, cheesy bite rather than a crunchy, toasted one.

For a hint of smoke and spice, I like to dust the halloumi with pimentón (smoked paprika) just as it comes out of the pan. It gives the illusion that the cheese has been grilled over a wood fire. Or use regular paprika, which will give you the spice part, at least.

As for the greens, I chose escarole because of its pleasing bitterness and rigid texture, which won’t immediately wilt on contact with the hot cheese.

A handful of slivered shallot or red onion adds pungency, while fresh parsley leaves brighten everything up. And finally, as an optional garnish, I sprinkle pomegranate seeds on top. Not only pretty, the ruby seeds lend a juicy sweetness that’s perfect with the saltiness of the cheese and garlicky bite of the dressing.

Once available in only specialty shops, halloumi has been popping up in many supermarkets. But if you can’t get any, other firm cheeses suited for frying and grilling — kefalotyri, queso blanco, bread cheese, paneer — can be used instead.

You can even substitute feta, though with its newfound fame, it may be the hardest of all to find.