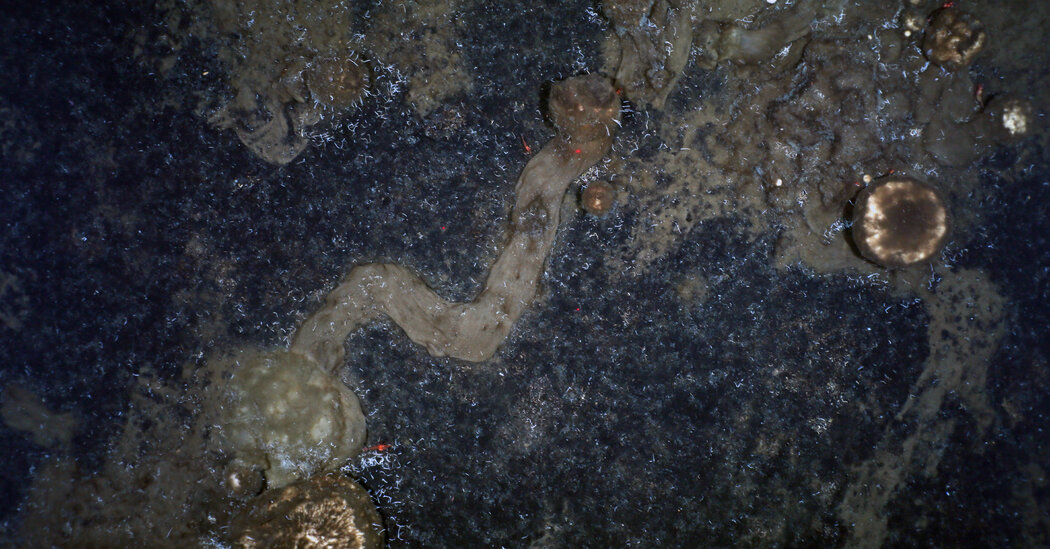 Deep-sea sponges are not known for their mobility. After all, they lack muscles, nervous systems and organs. And forget about fins or feet for traveling the Arctic seafloor.

But new research suggests these ancient life-forms can and do, indeed, get around — and far more than marine biologists believed. By studying hundreds of photos and videos of Arctic sponges, scientists from Germany’s Max Planck Institute of Marine Microbiology discovered a vast web of trails several feet long left in the creatures’ roaming wake.

“Sponges are one of the most primitive forms of animal life,” said Dr. Teresa Morganti, who led the study published Monday in the journal Current Biology. “At the beginning, we were very skeptical. We thought, ‘That’s not possible. Sponges cannot move.’”

For the study, Dr. Morganti and her colleagues examined underwater footage of Langseth Ridge, a marine mountain range not far from the North Pole that sits almost a mile beneath the permanently ice-covered water’s surface. Despite their initial skepticism, they found evidence that the wild sponges were not only moving about their frigid habitat, but also changing direction and even advancing uphill.

“They’re more active than we think they are,” said Rachel Downey, a deep-sea sponge expert at Australian National University who was not involved in the new study. “We’ve never had evidence of it like this before.”

In a handful of experiments, researchers have demonstrated at least some sponge species are capable of a slow crawl by contracting and expanding over days and weeks. “It’s one thing to know a sponge is capable of doing this in a lab. It’s another thing to see it play out in the wild,” said Stephanie Archer, a marine ecologist at the Louisiana Universities Marine Consortium who was not involved in the paper.

To get a glimpse of the deep-sea sponges’ extreme habitat, Dr. Morganti’s team turned to video and images captured in 2016 by Polarstern, a research vessel and icebreaker.

Footage from Polarstern depicted a community of more than 10,000 sponges (ranging in diameter from the size of a dime to that of a hula hoop) so dense it almost covered Langseth Ridge’s upper peaks.

Among and between the animals are interwoven trails of spicules, skeleton-like structures shed by the sponges. The researchers found spicule trails were visible in 70 percent of the hundreds of images of living sponges examined for the study.

How and why marine sponges move around the deep polar seas remain open questions, Dr. Morganti said. It’s most likely they’re wiggling toward food or away from their biological parents, she said.

Marine biologists are also unsure of the age of the Langseth Ridge trails, given that the habitat is largely undisturbed by water currents. Deep-sea sponges can live for decades, centuries or even millenniums and previous laboratory-based studies have clocked sponge movement at a riveting pace of four millimeters a day or a few millimeters per month (depending on which estimate you consult).

“A snail would be so much quicker,” Ms. Downey said. “It’s probably happening that thousands of sponges are moving at this moment all over the world. We’re just not seeing it.” When it comes to Langseth Ridge’s web of spicule paths, she said, “Those trails could be stop-start, stop-start over decades, or even hundreds of years.”

Dr. Morganti’s ongoing research aims to explain how, exactly, sea sponges manage to survive — let alone migrate — on the cold, dark, nutrient-scarce summits of barren underwater mountains near the North Pole. “How can these massive sponges survive in such an extreme environment?” she said.

The spicule trails provide tantalizing evidence that (despite their anatomical simplicity) sponges may be capable of perceiving environmental stimuli and inching toward food.

And since the sponge species on Langseth Ridge are also found in waters off the coasts of Norway, Russia, Canada, Greenland and Iceland, their newfound mobility might also be more widespread.

“This reminded me of why I fell in love with sponges,” Dr. Archer said of the new findings. “Every time we think we have them figured out, they surprise us.”