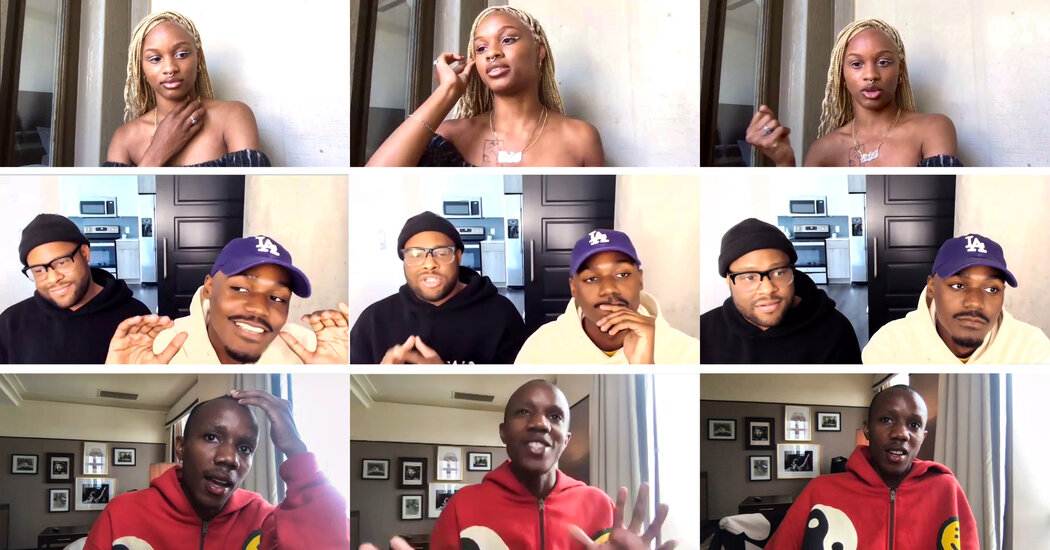 In the wake of the social justice movement and the pandemic, a new generation of image-makers is reinventing the look and feel of fashion media. Among those challenging antiquated ideas of beauty, celebrity and style are Kennedi Carter, 22; Quil Lemons, 23; and Ahmad Barber, 30, and Donté Maurice, 26, who work together as AB+DM. They have photographed Beyoncé for British Vogue (Ms. Carter), Billie Eilish for Vanity Fair and Telfar Clemens for Time (Mr. Lemons); Zendaya for Essence and InStyle, Regina King and Viola Davis for Entertainment Weekly and Stacey Abrams for Marie Claire (AB+DM), among other covers.

Here, they talk about the complicated balance of being both change-makers and artists.

The great “racial reckoning” of June 2020 created a pathway for historic firsts, including the use of young Black photographers for glossy magazine covers. How has it affected your working experience?

Ahmad Barber We’re using these opportunities to defy the odds — working from the south, like we do and Kennedi does, or even being so young and working from New York and Los Angeles like Quil. It’s no longer about “taking a chance.” It’s just “they’re qualified, they’re great.” We’ve all created undeniable work. It’s top tier work. It’s not about my Blackness or my identity. The work speaks for itself.

Donté Maurice We pray a lot. Our faith weighs in a lot. If it’s meant to be, it will be. We’re helping open doors. Longevity is key. We do everything with a spirit of excellence. Like Cardi B said, “If it’s up, then it’s stuck.”

Quil Lemons It’s also about finding community. It’s about our individual lived experiences. For instance, Kennedi understands femininity in a way I never could. When I say no to jobs, I always say, “No, but hit up this person.” I don’t want to be “the Only One,” the only Black man at this fashion table.

If the industry says they’re no longer using Black photographers, then we’ll create our own industry. We have enough infrastructure and enough relevance, culturally, and we understand that on a global level, the industry does not have a hold on when Blackness ends. We’ve realized our own power, which goes far beyond what anyone can say “yes” or “no” to.

But there is still a long way to go. Where are the red flags and the sticking points?

Barber We have to go through these extra obstacles. Our work is not looked at as just art. It’s looked at as: “Are you skillful? Are you technical? Do you know fashion? Do you know a reference? Do you know how to light a skin tone?” If I underexpose an image, purposely, it’s not looked at as simply my perspective or personal aesthetic. It’s looked as: “We told you that Black artists are not capable. We’re going to move on to the next.” We’re under a microscope. A lot of people are looking at our generation, waiting for us to fail. They’re waiting to say, “Look, they got a job too fast.”

“A lot of people are looking at our generation, waiting for us to fail. They’re waiting to say, ‘Look, they got a job too fast.’” — Ahmad Barber

Lemons Our art practices are still forming. There’s a lot of things we don’t want to share because it’s still so close to us. White artists have an entire canon behind them, and so do we, but it hasn’t been documented in the same way. We have so many more responsibilities as artists, and a lot of times, I just want to be an artist and make the work for myself.

But it’s so much weight we carry as Black people on an everyday basis … but, like damn, can we just exist and be free to be minimal, to just make art in our practice and not have the weight of the world placed on the camera? But I still have to fight for our people. It’s such a dance, but I’m over it.

Maurice There’s definitely that pressure. You feel like if you get a shoot and you mess it up, you don’t want to mess it up for other Black photographers coming up behind you.

“We can shoot Black people, but we can also photograph Asian, Latinx and Caucasian people, too.” — Donté Maurice

Kennedi Carter There isn’t room for error when you’re a Black photographer. Sometimes I feel I don’t have room to be as completely honest as I want to be on set. If I say, “Hey, this doesn’t look good” or “Hey, I don’t want to do this or that,” then it’ll all be snatched away. There are photographers that, no shade, can be the biggest, meanest people on the planet. And will do the most to ensure they have and keep their power and go about it in ways that are so disgusting and terrible. It’s quite frustrating, feeling as though I have to walk on eggshells voicing my opinion, when so many photographers are out there doing whatever they want.

What do you know now that you wish you’d known when you began your career?

Carter I wish I knew how much I could’ve charged back in the day. I was lowballing myself! If I knew how much money was pumped into this industry, best believe, I would’ve been charging an arm and a leg. But I didn’t know that until maybe five or six months ago! I think back on all the money that I’ve lost, and I get very angry. But moving forward, I’m not playing any games.

“I’m trying to lay the groundwork now to be an influence later.” — Kennedi Carter

Lemons Kennedi said exactly what I was going to say. That damn budget … what we working with?

Maurice Not all jobs are worth taking. It’s OK to say no, no matter how much money. Our mental health is better than the money. That’s one thing we’ve learned, business-wise. People will stress you out, talk to you any type of way.

Barber Dealing with the communication with some clients, especially in the celebrity world: crazy deadlines, or sometimes it’s just “show up with your camera,” ignoring your perspective.

Maurice Forming good relationships is where the joy comes in and where the money comes in, too. We’re able to get brought back by clients, and the process gets more comfortable each time. Some new clients look at every frame in the monitor. The next time, the second or third time, they’re not looking at the screen.

Lemons Usage is really important — working out the back-end details, how your image will be circulated and used. People try to use your images for long periods of time. Then you’re walking down the street and seeing a photo that you took. The budget was not big at all, and it’s now a billboard.

Is there any job that you’d pass on or hold out for in the hope of shooting another?

Barber There’s still a sense of hierarchy when it comes to jobs and getting the next job. There is a diversity in what we’re doing, even among each other — different ways in how Kennedi or Quil captures Black people. We have personal projects we want to develop. It’s also about branching out into other worlds to increase our longevity.

Social media has played an important role in many of your careers. How do you use it effectively?

Lemons The hype, the metrics don’t bother me the way they once did. I’m hellbent on authorship. Kennedi tweeted about how Rafael Pavarotti doesn’t share any of his images. He takes a picture of the picture and shares that on social media. I like that. Once the image is printed where it was commissioned, that’s all it needs to be. Sharing on social media is the icing on the cake.

For my practice, social media doesn’t influence me the way it once did. There was a time I was nervous to share: “Will this perform well?” Now, it’s more about the process and being vulnerable in creating the image, but beyond that I don’t care anymore.

Carter At one point, Instagram was fun, but now it’s high pressure with more eyes peering to see what you’re doing. I don’t post as much now — even with my personal work since I want to make a book one day. I want to keep the book to things that haven’t been seen so I can sit with it a bit longer. Many jobs also come from editors following you, though, so there’s that. But if an editor is trying to find you, they’ll find you.

Maurice We share a lot of our work on social media. We want to have work for younger photographers to reference. Images that look like them! Seeing Black women in Iris van Herpen gowns — there are not many images like that out there.

How has the pandemic affected your work?

Barber We didn’t have these types of jobs, at this level, before Covid. There are limitations when and how we can shoot, number of people on set, tests, etc.

“We’ve realized our own power, which goes far beyond what anyone can say ‘yes’ or ‘no’ to.” — Quil Lemons

Lemons I didn’t do anything for the first three months of the pandemic. I drove across the country. I’ve lived in Seattle, New York, Los Angeles. I spoke to Mickalene Thomas about the importance of having fun. I feel more grounded as an image maker. I’ve completely ridden myself of ego. My images have gotten a little weirder, and I’ve freed my mind to let photography be a sense of play rather than making a “perfect” image. And I found an agent.

Carter My process before Covid was me shooting my personal work, shooting what I wanted to shoot. Now, it’s mostly assignments — what’s brought to me, briefs and commissions. Covid protocol is pretty standard now. I’m scared to see what it’s like in “normal” times.”

Do you feel responsibility to those who are coming next?

Maurice We love having younger people on set. Our producer, tailor, manicurist — they’re all younger. We handle lighting ourselves so we take that extra time to help assistants with lighting. We don’t give them the secret sauce but help familiarize them with the behind-the-scenes process and look into our world and what it takes to get to some of the images we take.

Lemons On set, I fight tooth and nail to get what I want and to make sure that everyone who looks like me, no matter their age, is not second-guessed. Making sure that if I can’t do a job, that I always recommend someone else for it. Tap into that before it becomes something you can’t access. I used to feel so alone, like “the Only One.” I’m so happy this conversation is happening and happening beyond New York.

Carter Like Quil, when I’m unavailable, I refer someone else for the job every time. I’m trying to lay the groundwork now to be an influence later.