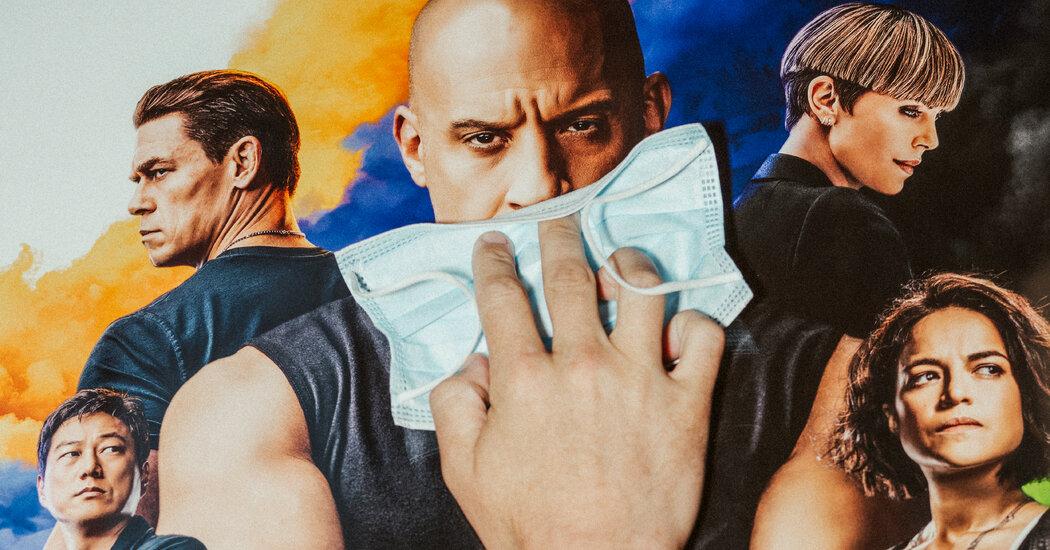 Out in the audience, we sit stock still, at appropriately safe distances. There are 25 of us, tops. One attendee lowers her face covering a few inches, as if to catch a whiff of tanning lotion and Michel Legrand’s sultry music. Viewers around her tense up. An usher is summoned, discreetly asking for compliance. She raises her mask, but the employee lingers for a moment, making sure it sticks. (This is much better than what happened at a midday screening of Federico Fellini’s “La Strada,” when a flare-up over smuggled-in snacks threatened to plunge the anticipatory mood into fury.)

As ever, the movies are showing us a reality that’s out of reach. That gap feels especially wide right now, as New York’s art houses and multiplexes reopen, shakily, and the C.D.C. relaxes safety guidelines, a development that has only added to the friction. The experience of being back isn’t quite what it used to be, at least not yet. Bathrooms are spotless to a spooky degree. The slick smell of popcorn butter — the oddly comforting aroma of Hollywood itself — hasn’t returned so far. Concessions are unavailable in many theaters. Deserted lobbies and empty escalators add to the overwhelming zombie-mall weirdness of it all.

What was I hoping to find? Can you feel phantom FOMO for something that isn’t even happening? Before the pandemic, I went to the movies for a living, never realizing how important the going was. During lockdown, the movies tracked me down (considerately) via streaming links when that was the only option. Sometimes it felt like pretending. For more than a year, I’ve been desperate to return the favor and have now embarked on a fact-finding mission across the city, like Martin Sheen heading upriver in “Apocalypse Now.” Hopefully you forget how that one ends.

Only the fully vaccinated should be witnessing this. That’s certainly not the case. After waiting the suggested two weeks from my second Moderna shot in late March (a sluggish day that felt like a system reboot), I rejoined the company of filmgoers. It felt vaguely like getting away with something you knew you shouldn’t be doing.

No apologies. The excitement of being back, however tinged by free-floating nervousness, can’t be downplayed. I drank in Andrei Tarkovsky’s elliptical 1975 art film “Mirror” like so many vodka flights, every mysterious windswept field and liquid interlude frizzing my synapses. Amazingly, my tiny Elinor Bunin Munroe Film Center audience greeted the end credits with a robust chorus of woos (possibly a first for Tarkovsky). Maybe we were cheering the mere idea of surviving a film together. A theater worker dismissed us row by row; we obeyed like good little schoolchildren.

There’s something performative about returning to the movies right now. The laughing is louder. Perhaps it’s compensation for all the taped-off rows, all the dead space. We’ve become the film ourselves, telegraphing our emotions in ways that only 14 months of mouth-obscured masking can spur. Case in point: Orson Welles’s chatty 1973 documentary “F for Fake” is amusing in a purring, intellectual way, but it’s not the riot that a few superfans at the Paris Theater in Midtown were clearly having.

It helps to bring your own enthusiasm. Otherwise, a mind can wander to the whooshing air-conditioning units, freshly refitted with the required MERV 13 filters and somehow louder than memory serves. Is the ceiling too low? Was that a cough or a chuckle? Don’t let yourself get too distracted, or you’ll be demoted from paying customer to cop.

At Brooklyn’s Alamo Drafthouse on reopening night, House of Wax, the morbid cocktail bar-slash-museum, was curtained off and dormant, a shame. The foyer, carpeted in patterned orange to look like the Overlook Hotel in “The Shining,” was unusually quiet.

Still, a temperature taker greeted me as if the party were in full swing. Sliding into my booth for Guy Ritchie’s pounding “Wrath of Man,” the sheer volume transported me for the first time in months. (We can have dumb things again.) A toothpick-speared burger wafted by on a tray. (Are they insane?) Feeling invulnerable, I decided to test the kitchen and order off-menu. My shake — half-chocolate, half-strawberry — arrived with a straw I knew I could slip under my mask. Jason Statham bros to my left and right tucked kernels of popcorn under theirs.

As fine a time as I’m having — it’s just like being at home but louder and larger — the communal experience is far too polite to sustain a proper action buzz. That will change in time as crowd size ramps up in the coming weeks, along with the fear factor.

But what’s the alternative? It’s almost too scary to consider. Blessed with an old-school marquee and a loyal crowd, the Regal UA Court Street in Brooklyn Heights has long been my cozy local: a treasured destination for a Thursday-night horror film. “Spiral,” the new “Saw” reboot starring Chris Rock and Samuel L. Jackson, should have fit the bill perfectly, even in its sloggy, imperfect form. But on opening night, a grand total of six people sullenly staked out their spots in the otherwise empty house. (One of them was my wife, discovering that masks can be handy eye-blockers if you ever want to avoid the sight of gore.) So listless was our engagement, no one complained when a back-row viewer had an hourlong argument on her phone. Some forms of torture are more entertaining than others, I guess.

For the saddest vision of the current purgatory of multiplex moviegoing, a visit to the AMC Empire 25 in Times Square reveals a postapocalyptic setting in need of characters. Virtually no one is in the lobby. Two teenage girls — are they the last two human beings left alive? — take selfies on a vacant upper mezzanine. Still, higher I go. Somewhere, there’s the rumbling of Godzilla, or it could be King Kong. At the theater, it’s empty. Daniel Craig’s voice, barking out of a trailer for October’s already thrice-delayed James Bond film “No Time to Die,” echoes in the antiseptic space: “If we don’t do this … there’ll be nothing left to save.”

Maybe 007 is too late. None of this will change until we’re done with social distancing, a threshold that’s about as conceivable as licking a subway pole at rush hour like Elizabeth Berkley in “Showgirls.” Better to find the theater that takes your safety as seriously as you do. At Greenwich Village’s IFC Center on a Friday night, several tickets were still available for a never-released film by the zombie maestro himself, George A. Romero. Filmed in 1973 and shorter than an hour, “The Amusement Park,” about society’s rejection of the elderly, is more a walking, talking metaphor than a fully successful piece of drama. But it has the meat-and-potatoes solidity of the director’s low-budget Pittsburgh productions, and it will put you in mind of “Night of the Living Dead” or “Dawn of the Dead” — that is, if a year of being boarded up watching doctors bicker on TV hasn’t already cemented you there.

We numbered fewer than 10 in the theater and our spacing was such that I didn’t mind the stealthy crack of a can of something. Spike Lee, Miranda July and Aaron Sorkin, among others, welcomed us back in a bespoke trailer created for IFC Center that stressed keeping those masks on. I felt good supporting a theater that nourished me in better times. Everyone there did their level best to avoid the deep-dish irony of unearthing a Romero castaway during a pandemic. The quiet was eerie.

Do I miss the texters, the scrollers, the screen-grabbers, the rambling Q. and A. hijackers who never get around to their question? Candidly, no. I can enjoy a movie by myself, and have done so for decades, long before I got paid for it.

But I don’t want to get too comfortable without those strangers. Selfishly, I want them beside me on the off-chance we’re all changed for the better by a “Parasite” or a “Nomadland.”

And if that’s impossible right now, so be it. There was that one warm spring evening when I fooled myself that I was jumping in a cab for the hottest screening of the season. It was the opening night of Zack Snyder’s robustly enjoyable “Army of the Dead,” a film equally indebted to the sinewy urban nightmares of John Carpenter and the dazzling scherzo inventions of Steven Soderbergh’s “Ocean’s Eleven.” It also has a zombie tiger.

At the Paris, there was no red carpet. There was no line. There was no crowd to speak of. There was free popcorn. I plopped down in my fifth-row seat and tuned out the handful of people behind me. Kicking back, I did my best Robert De Niro in “Cape Fear” (sans cigar), cracked a wide smile and let the grade-A nonsense wash over me.

The movie is already on Netflix, in case you’re interested. But you really had to be there.