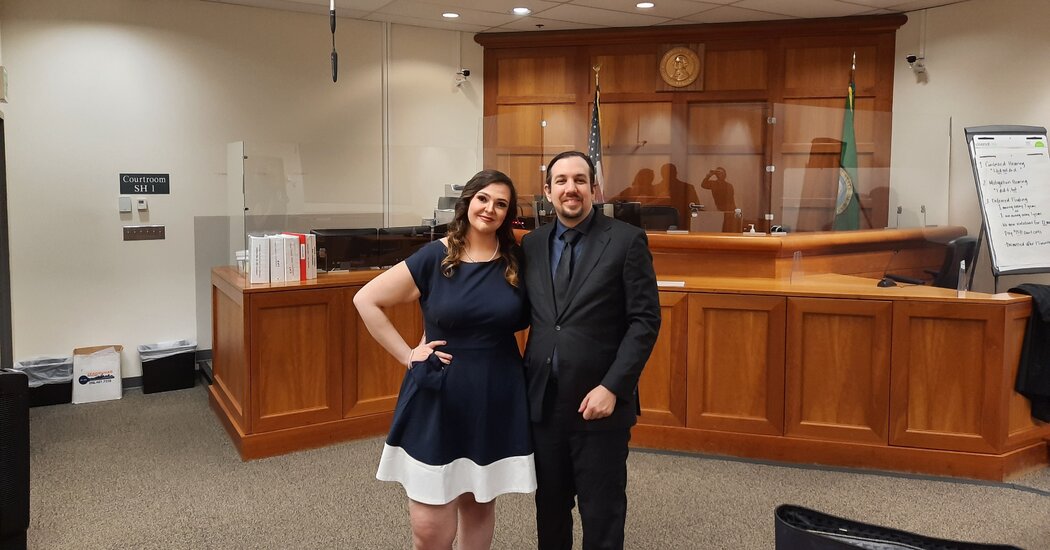 The two got involved with Wikipedia around 2009 and 2010, when Ms. Thurston was a middle school student in Mechanicsburg, Pa., and Mr. Del Buono was starting a job as a software engineer for an aviation company in Hood River, Ore. They each found in Wikipedia a collection of passionate moderators, writers and editors who bonded through chat rooms, where they discussed editorial decisions and other matters related to the maintenance of the site.

“As you get more into Wikipedia, what you find is there’s actually a fairly extensive, tight-knit community,” Mr. Del Buono said.

One of Mr. Del Buono’s contributions to the site was his creation of a bot that blocks malicious users. Ms. Thurston wrote Wikipedia encyclopedia entries — among them the original page for Simone Biles, which Ms. Thurston, a gymnastics fan, started early in Ms. Biles’s career.

They kept in touch. Their paths crossed again in 2014, at the annual Wikimania Conference, which was in London that year. They started talking more and more after that.

By the beginning of 2016, Ms. Thurston felt that the friendship had shifted.

“We were talking every day,” she said. “It had become clear to me that either we are best friends and I need to know that, or there’s potential for something more.” So Ms. Thurston decided to “rip the Band-Aid off” and communicate how she felt.

“I remember out of the blue receiving a message,” Mr. Del Buono said, “saying, ‘look I like you, do you like me? We need a real answer to what’s happening between us.’”

For Mr. Del Buono, that was a welcome message.

“We’re both outgoing, but we also tend to keep our feelings inside a bit,” he explained. “So we weren’t necessarily making it obvious that we should get together.”

They’ve been in a relationship since. But there were a few years of long distance. In 2016, Mr. Del Buono lived in Washington; Ms. Thurston had moved from Pennsylvania to Florida, where she was studying computer and software engineering at the Embry-Riddle Aeronautical University.

Ms. Thurston and Mr. Del Buono overcame the distance, in part, by playing video games together online. Not only were games a bonding activity, they said, but gaming also gave them insight into how they function as a pair — and how their personalities can differ.

“Matthew is definitely more of a rule follower,” Ms. Thurston said. “He’s a fan of structure, to an extent that I’m very not.”

There was no formal proposal — “we’re both kind of allergic to theatrics,” Ms. Thurston said — but they started talking seriously about marriage sometime in 2020. On March 14 of this year, Ms. Thurston and Mr. Del Buono were married by Judge Joseph Campagna at the Shoreline Courthouse in Shoreline, Wash. Ms. Thurston is now Ms. Thurston-Del Buono.

There was no cake on their wedding day. Ms. Thurston-Del Buono and Mr. Del Buono opted for two pies (apple and lemon meringue) since they had scheduled the wedding to land on Pi Day.