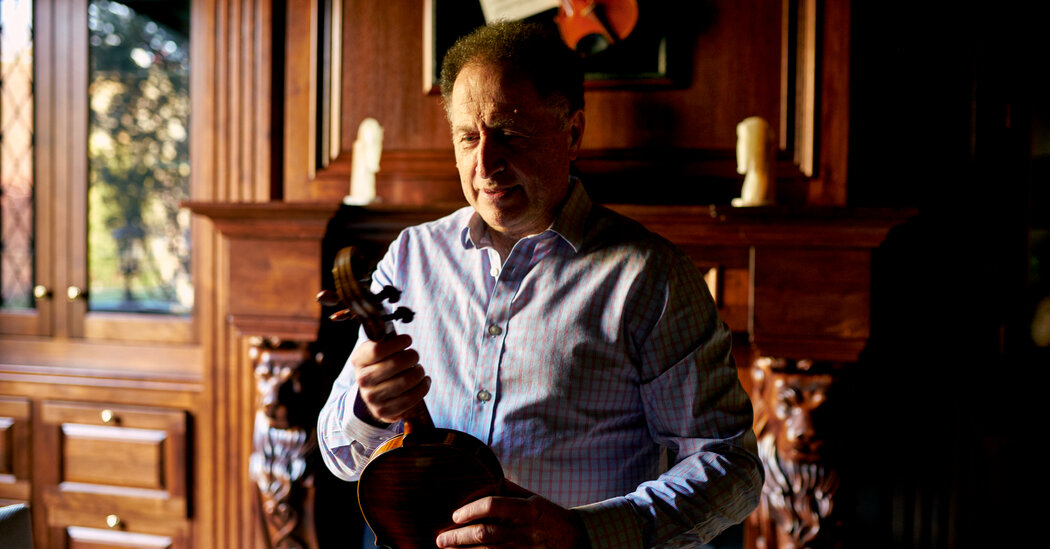 The Alphadyne Foundation — who were they? Christine Cox didn’t know, and Google didn’t seem to either, when she checked late last year, during the dark days of the pandemic, as organizations like hers were fighting to stay alive.

Cox is the co-founder and artistic director of BalletX, a contemporary dance company based in Philadelphia. Though she was trying to stay optimistic about its prospects, funding was slowing and donors were tiring of video appeals. Then, in December, Damian Woetzel, the president of the Juilliard School, rang up, saying a mysterious benefactor named Alphadyne might have some funding. Cox drafted a proposal, trying not to raise her hopes. A string of grant-makers had already turned down BalletX, and, even in the best case scenarios, money usually took ages to arrive.

But eight weeks after she sent her pitch, the money from Alphadyne came in. It was real money, six-figure money, more money than any donor had ever given them in a single year. Even now, Cox can’t believe it’s real. “We’ve never ever received any kind of gift like this,” she said. “My jaw dropped, and I started to cry.”

The scenario was repeated over the last year at various performing arts organizations in and around New York. At Dance Theater of Harlem. At National Sawdust, the concert space in Brooklyn. At the Kaufman Music Center, in Manhattan. A call came in, a proposal was requested, and then, within weeks, boom: a serious chunk of change, courtesy of the Alphadyne Foundation, whoever they were.

The group who helped select the recipients turned out to be as colorful as Alphadyne was mysterious.

Along with Woetzel, they included Jay Dweck, a financial-technology consultant and violin hobbyist who made headlines in 2014 for installing a million-dollar Stradivarius violin-shaped swimming pool in his back garden; and Annabelle Weidenfeld, an English former concert manager who, in the ’70s, fell in love with the legendary pianist Arthur Rubinstein — and vice versa — despite a six-decade age difference. (A decade after his 1982 death, she married the English publisher Lord George Weidenfeld, a betrothal that gave her the title lady.)

Gil Shiva, a former board member of the Public Theater, was also tapped to pitch in. (Alphadyne has helped underwrite the Public’s Shakespeare in the Park presentation this summer.)

Connecting them all was Philippe Khuong-Huu, a former Goldman Sachs executive and founding member of Alphadyne Asset Management, an investment firm. A 57-year-old Frenchman of Vietnamese descent, Khuong-Huu is, by and large, the main man behind the Alphadyne Foundation, which, before the pandemic, didn’t exist.

He is also relatively private. His only real foray into the public eye happened a decade ago, when his purchase of a terraced 10-room Park Avenue duplex caught the attention of The Observer. At first he declined to be interviewed for this article, and only agreed after learning that a story about the foundation would be happening with or without his input.

In the interview, Khuong-Huu said that last year, as the pandemic bore down on New York, he and his fellow Alphadyners were seized with a sense of urgency and, though he didn’t use these words exactly, noblesse oblige.

“Quite early on, we realized that this pandemic was affecting people very unevenly, beyond the general inequalities,” Khuong-Huu said. “Once the crisis is over, you’ll have people who have done something about it, and people who haven’t. We had to do something immediate.”

This isn’t how things usually work in the nonprofit arts world, where organizations put enormous effort into identifying potential donors, and can spend years painstakingly cultivating those relationships before asking for a single dime.

Yet during the pandemic, Alphadyne was among a growing group of philanthropies, a sector oft-criticized for being slow to respond to a crisis, that acted with haste, according to Sean Delany, former chief of the Charities Bureau for New York State.

“I’m not saying this is a universal revolution, but I’ve seen a lot more of it than when times were more normal,” Delany said.

Performing artists were especially walloped over the last year and, for various reasons, often unable to access financial relief. Between July and September of 2020, when the average jobless rate was 8.5 percent, 55 percent of dancers, 52 percent of actors and 27 percent of musicians and singers were unemployed, according to the National Bureau of Labor Statistics.

Committing to give away an initial $10 million, the foundation went about identifying efforts already underway in New York to help people in need.

Khuong-Huu said that Alphadyne’s money flowed to ReThink Food NYC, through which restaurants feed the poor; Accompany Capital, a nonprofit that supports businesses owned by refugees and immigrants; and the Bronx Community Foundation.

More than half of the foundation’s money was set aside for the performing arts, a sector in which Khuong-Huu has some expertise. He sits on the board of directors at Juilliard, and his two teenage daughters are prizewinning violinists.

And he had a strong belief about what would help artists more than handouts.

“For performers, what they actually need most is to perform,” he said. “Getting a check from the government is good, but giving a concert is very, very meaningful.”

Ensuring that the money went toward getting performers performing again was where his S.W.A.T. team of consultants came in.

Dweck — his Stradivarius-shaped pool was again in the news when Mariah Carey rented his house last summer — knew Khuong-Huu from their days at Goldman Sachs, where they bonded in part over their shared love of the violin.

When asked for recommendations, Dweck immediately thought of the Perlman Music Program, which became another Alphadyne recipient. With Kate Sheeran, the executive director at the Kaufman Music Center, he helped create the Musical Storefronts, a pop-up concert series that ran in New York from January to April.

“We got 100-percent uptake,” Dweck said of interest from musicians. “People said, ‘Where and when?’”

The site of the series, an empty storefront by Lincoln Center, was donated. Sheeran said that Alphadyne provided the necessary funding, at a cost of some $450,000, allowing the center to give well-paid work to 200 artists, along with sound engineers and ushers. Many of the musicians hadn’t had a live paid gig since the pandemic began.

“We were just really thankful,” said Isaiah J. Thompson, a jazz pianist and recent Juilliard grad, who performed in the series.

Lady Weidenfeld, who met Khuong-Huu through the pianist Menahem Pressler, her companion since the death of Lord Weidenfeld in 2016, helped out from England, suggesting projects and changes and checking artists’ fees and the like.

Woetzel connected Alphadyne with National Sawdust because of its support for independent artists. “That was the community getting hit the fastest, because there were no gigs,” Woetzel said.

National Sawdust had cut staff by 60 percent and winnowed wages, and the artistic director and co-founder Paola Prestini said it was unclear how the venue could survive. But the Alphadyne money allowed it to build out a digital platform, commission work from 100 artists, give 20 composers $3,000 commissions and put on workshops and master classes. Digital engagement numbers ticked up.

“It was transformational — I couldn’t believe it,” said Prestini. “It just felt like all of a sudden, the community that we had been trying to build, it just congealed.”

This year, Prestini said, Alphadyne gave National Sawdust a second round of funding, again in the six figures, and more than what was given the first time around.

At BalletX, the Alphadyne money covered the hole in their budget, allowing their dancers 20 weeks of paid work. Cox gave commissions to 15 choreographers, with five doing live performances this summer, including in June.

Two arts nonprofits used Alphadyne funds to partner with the Violin Channel and create a 10-episode online concert series that ran from February to April. Geoffrey John Davies, the founder and chief executive of the Violin Channel, said performers were paid concert rates for four hours of work, and the footage was edited down to a 40-minute show and a 10-minute interview to which the artist would hold the rights.

In the end, said Davies, the series racked up millions of views. Production of a second series, also supported by Alphadyne, is scheduled to begin in June.

“They were just over the moon,” he said of the artists. “I was inundated with texts saying, ‘Thank you, thank you.’”

In all, Khuong-Huu said the Alphadyne Foundation granted $6 million to the performing arts, but declined to provide further details on how much more went into its fund this year. The foundation has yet to issue any public pronouncements or news releases, and still doesn’t have a website. Khuong-Huu also said it does not accept unsolicited requests.

There’s still an air of mystery surrounding the foundation, even as word of its largess has spread in the New York arts world. Anna Glass, Dance Theater of Harlem’s executive director, said the organization received $250,000 from Alphadyne in the fall — three weeks after they sent in a two-paragraph proposal. The money helped cover two residency bubbles for 16 of their dancers.

Still, Glass said, she barely knows a thing about the giver of the gift.

“I just want to say thank you, man behind the curtain,” Glass said. “Whoever you are, thank you.”