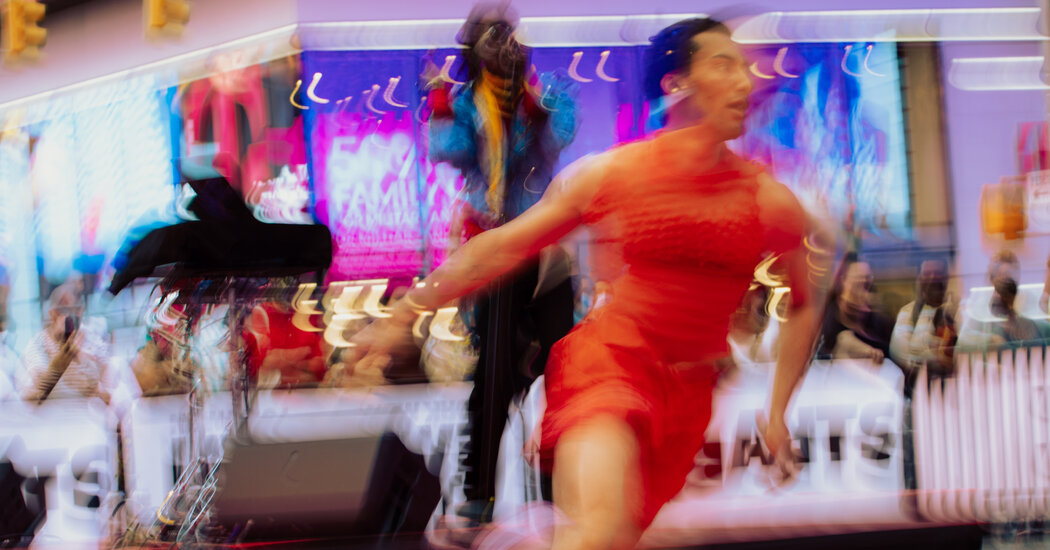 “Anybody out there know what Afrofuturism is?” Bill T. Jones asked in the middle of Times Square on Saturday night.

Jones is, among other things, the artistic director of New York Live Arts, an experimental performing arts center in Chelsea. It was in this capacity that he appeared on Saturday to discuss a free outdoor performance of “The Motherboard Suite,” a movement and musical work he directed for the center’s Live Ideas festival.

I’m not sure anyone who watched this event came away with a much clearer sense of Afrofuturism, but the outdoor performance on Saturday certainly inspired renewed appreciation for live ideas and live arts.

This year’s theme was “Altered-Worlds: Black Utopia and the Age of Acceleration.” Appropriately for a topic tethered to technology, the five-day festival was a hybrid of virtual and in-person symposia and performances. In one virtual segment, Reynaldo Anderson, a co-curator, defined Afrofuturism broadly as “the speculative product of thought of people of the African diaspora.”

He spoke of visions of the future, and the festival provided them, though it also felt very much of the moment, as the city’s performing arts scene cautiously adjusts to new possibilities at this stage of the pandemic.

“The Motherboard Suite” is itself a hybrid: a 45-minute concert by the slam poet turned musician Saul Williams of tracks from his albums “MartyrLoserKing” (2016) and “Encrypted & Vulnerable” (2019), interpreted in the flesh by six distinguished choreographers. I experienced it three ways. On Thursday, I watched its premiere in the theater of New York Live Arts. On Friday, I stayed home and encountered it virtually. On Saturday, I ventured out into Times Square for the outdoor show.

The Thursday show was a milestone, the first live performance in the theater since last March.

For a set, the show had an installation by Jasmine Murrell of mirrored rock and soil formations in the shape of hands or giant cactuses. It reminded me of some desert planet on the original “Star Trek.” Murrell was also responsible for the headdresses worn by several of the choreographers — who, with the exception of Shamel Pitts, performed their own work (Pitts’s was danced by Morgan Bobrow-Williams, and Maria Bauman was joined by Samantha Speis). The headdresses were eye-catching: one like a giant brain or large Afro, another like a Cubist head made from shards of vinyl records.

But these theatrical elements (including strobe and neon lighting, by Serena Wong) felt perfunctory. Williams, charismatic in his sunglasses, delivered his compositions on a rear platform (joined by the multi-instrumentalist Aku Orraca-Tetteh), and each choreographer took a song or two, mostly alone. The more striking among them, especially Jasmine Hearn, commanded attention, but connections between sections and performers seemed awfully jerry-built and unimaginative, with ensemble bits on the order of “now everybody freeze in a pose.” Live doesn’t automatically equal amazing.

The virtual option happened via a platform called Interspace. In it each visitor is represented by a kind of mobile name tag, an avatar that you can arrow-key around a 3-D diagram of a theater complex. You can walk into a gallery and check out a wide-ranging exhibition of visual art by the Black Speculative Arts Movement. You can mingle, bump into other visitors virtually, strike up a conversation or eavesdrop on someone else’s before and after entering the digital theater for a digital show.

Watching the show this way was like watching any other video of a live performance, except that the stream froze for me halfway through. Especially after experiencing the flawed-but-real thing the night before, the virtual version felt less like a utopian taste of the future than an already semi-obsolete world in which I hope we won’t have to live.

For much of prepandemic life is returning, as the exciting and frightening prepandemic-size crowds in Times Square attest. There, on Saturday, “The Motherboard Suite” had no sets or lighting of its own. It had a superior substitute: the electronic billboards out of “Blade Runner.” At times, the roar of motorcycles or the drums and chanting of Hare Krishnas inadvertently chimed with the score, but the energy of the place charged the performance continuously.

The performance took place in a cordoned-off area of Father Duffy Square. This time, the choreographers, rather than entering and exiting, all sat onstage, watching and interacting with one another. And this change, along with the increase in audience (potentially huge if small in practice), changed everything. The show came alive.

Even mishaps were transformed. During Marjani Forté-Saunders’s solo, her headdress — a top hat holding down elephantine face-draping coils of fabric — started to unravel. Ditching it, she was freed into new force. This accident opened up connections in the choreography: the way that Kayla Farrish exploded after removing her Cubist vinyl helmet, or how the hands of Bobrow-Williams felt for his missing giant brain after he took it off, as if having trouble adjusting to who he might be without it.

Only d. Sabela grimes seemed empowered by his burdensome costume: a body-covering, raffialike fringe in purple and white with a ski mask bordered in cowrie shells. But his popping isolations also drew greater shamanistic power from the street energy of Times Square. The show became less about cosplay and more about being together.

In a sense, the elaborately costumed figures of “The Motherboard Suite” fit right in with the costumed tourist attractions of Times Square. But Williams’s sometimes profane lyrics — largely words of opposition to the capitalist fantasia around him, the seductive status quo — took on a much greater charge than they had in the other, less public spaces. His concluding list of things to hack into (capitalism, sexuality, God) felt less like preaching to the choir. Location matters. If the show didn’t start a revolution, it was a good introduction to what New York Live Arts can be.