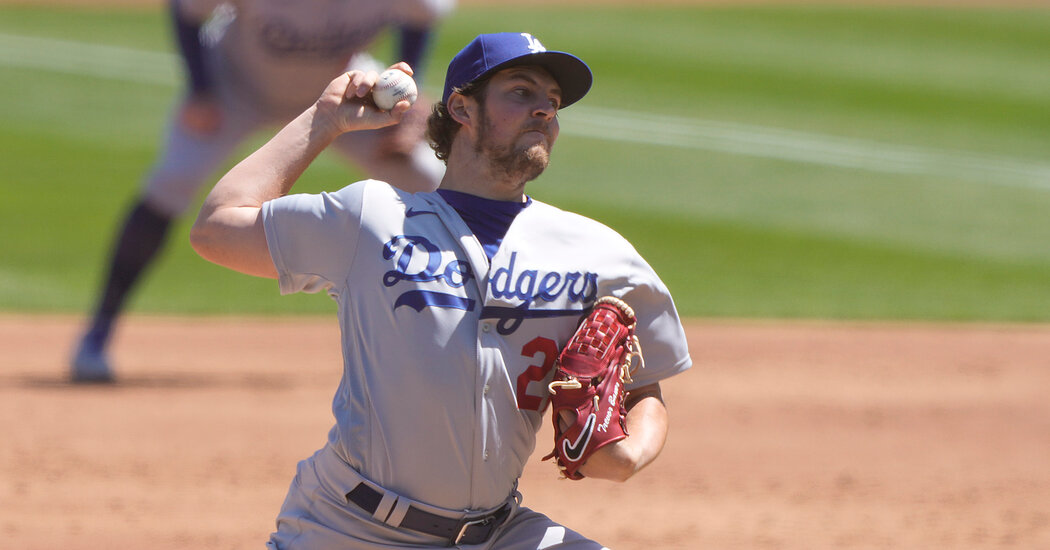 The baseball season is barely a week old, but questions of cheating, a problem that has plagued the sport in recent years, have already surfaced. The Athletic reported on Thursday that Major League Baseball is looking into baseballs used by Trevor Bauer in his start for the Los Angeles Dodgers against the Oakland Athletics on Wednesday. The article cited unnamed sources who said the balls were sticky and had visible markings on them.

Bauer, the 2020 National League Cy Young Award winner, reacted sarcastically to the report on his Twitter account. He also noted that many baseballs were being collected from games across baseball, not only from him.

The retrieval of the balls is part of a new policy that M.L.B. has instituted this year in which balls from every game, along with statistical data of spin rates, are being examined to determine if pitchers are putting illegal substances on balls, contrary to the rules of the game. Although the policy is in its initial stages, findings of illegal substances could result in fines or suspensions for players and club employees, including executives, who assisted in any wrongdoing.

M.L.B. did not comment on either report. But in March it sent a memo to all teams outlining how it would use on-site staff members and equipment authenticators in clubhouses, tunnels and dugout areas during games to check for foreign substances and maintain a strict chain of evidence, as difficult as that may be to do. It also said that for the first time it would use Statcast spin-rate data to determine unusual upticks for individual pitchers.

Manager Dave Roberts addressed the situation before the Dodgers’ game against the Washington Nationals on Friday.

“My understanding is that umpires collect baseballs from all pitchers, and balls that were in play, to collect samples,” Roberts said. “I just hope that our player is not singled out. That’s the one thing I want to guard against.”

He was then asked if Bauer had been singled out.

“At this point, yeah,” Roberts said. “That’s the only name I heard floating around.”

For over 100 years, since the spitball and other so-called freak deliveries were outlawed in 1920, pitchers have used clandestine means to slip various tacky substances onto baseballs in order to improve their grip to throw the ball harder and enhance movement through increased spin. It is generally accepted that the more spin, the better for pitchers, both with fastballs and breaking balls.

Many believe the practice is still widespread throughout the game. Some insist tacky substances are a matter of safety, to avoid slippery balls flying out of pitchers’ control and hitting batters.

Another way to increase spin rate is to cut the ball, or to release it at a slight angle.

Bauer has publicly decried the use of illegal substances to increase the spin rate. Three years ago, he said he participated in laboratory experiments that determined that pine tar on the surface of a baseball could improve spin rates by 300 to 400 revolutions per minute. He said at the time that as much as he had tried, he had been unable to find any other methods for achieving that kind of drastic increase.

In 2018, when Bauer pitched for Cleveland, he set off a storm when he appeared to insinuate on his Twitter account that the Houston Astros were acquiring pitchers and improving their performances by having them doctor the balls, which the Astros denied. (This was before revelations that the Houston batters had been illegally stealing signs the year before.)

Bauer has compared the use of foreign substances on baseballs to steroids, and has argued that either all pitchers should be permitted to use the same substance on the ball, or the rules should be enforced.

“If you just look the other way and you let some people do it, the people who chose not to do it are at a competitive disadvantage,” he said at the time.

There have been times when Bauer almost appeared to be making his argument on the field, proving his point via curious increases in his own spin rate. According to FanGraphs, Bauer’s normal spin rate on his fastball is about 2,250 r.p.m., which aligns with the league average. But in the first inning of his start on April 30, 2018 — one day before his Twitter post that seemed to troll the Astros — his spin rate soared upward by 300 r.p.m. in the first inning, then settled back to its normal rate.

Throughout September 2019, Bauer’s spin rate continued to jump, according to FanGraphs, and that process continued into 2020.

After M.L.B. declared its new policy, Bauer questioned how it could be proved that a substance on the ball came directly from a pitcher and not someone else, including another player.