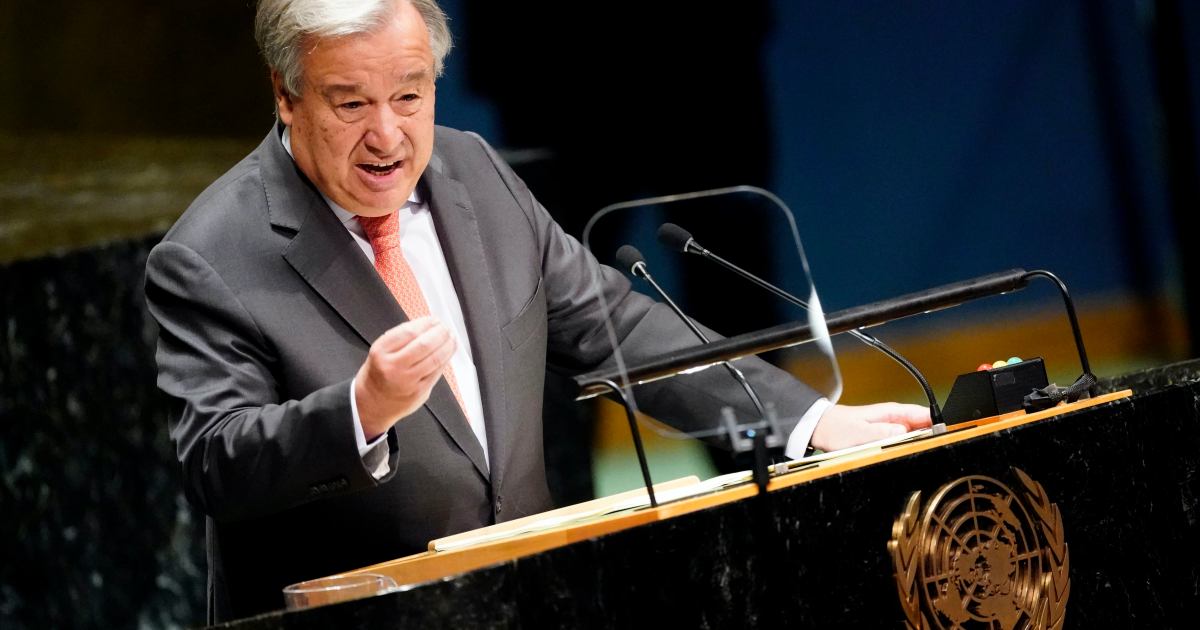 The fighting in the Middle East must stop immediately, United Nations Secretary-General Antonio Guterres said at a UN General Assembly meeting on Thursday, as he urged Israel and the Palestinians to call an immediate ceasefire and pledged to launch a full humanitarian appeal for funding.

“The past ten days have witnessed a dangerous and horrific surge in deadly violence in the occupied Palestinian territory, particularly Gaza, and in Israel,” Guterres told the meeting called by the Organisation of Islamic Cooperation and the Arab Group.

“I am deeply shocked by the continued air and artillery bombardment by the Israeli defence forces in Gaza,” the UN chief added.

“Horrified” by reports that nine members of one family were killed in al-Shati refugee camp, Guterres also emphasised: “If there is a hell on earth, it is the lives of children in Gaza.”

He said he was also extremely concerned about the destruction of media offices and the killing of a journalist in Gaza, stressing that journalists have a right to conduct their work.

According to the UN, the bombing has claimed the lives of 208 Palestinians, including 60 children, and injured thousands more. The firing of rockets by Hamas towards Israel has resulted in 12 fatalities including two children, and hundreds of injuries.

The hostilities have caused serious damage to critical infrastructure in Gaza, including roads and electricity lines, Guterres said. Crossings have been closed and power shortages are affecting water supplies. Hundreds of homes have been destroyed. Air strikes have also damaged several hospitals, which were already overburdened by the coronavirus pandemic.

Over 50,000 Palestinians in Gaza have fled their homes and many are seeking shelter at schools run by the United Nations Relief Works Agency for Palestine Refugees in the Near East (UNRWA), where access to water and food is limited, Guterres said.

Aid agencies must be able to carry out their mission, he continued, noting that the UN’s Central Emergency Response Fund and Humanitarian Coordinator plan to send $14m for the occupied Palestinian territories.

Guterres called on Israel to allow unhindered access for humanitarian aid – including food, fuel and medical supplies – into Gaza. He also expressed concern for the rockets fired from Gaza, which have reached as far as Tel Aviv and its suburbs and Ben Gurion Airport and have claimed civilian lives.

“Even wars have rules,” the secretary-general stressed, also emphasising: “Civilians must be protected. Indiscriminate attacks, and attacks against civilians and civilian property, are violations of the laws of war.”

“There is no justification, including counterterrorism or self-defence, for the abdication by the parties to the conflict of their obligations under international humanitarian law,” Guterres added.

He urged Israeli authorities to abide by the laws governing armed conflict, including the proportionate use of force and called on them to exercise maximum restraint in their military operations.

He further urged Hamas and other armed groups to stop the indiscriminate launching of rockets and mortars from highly populated civilian neighbourhoods into civilian population centres in Israel, in clear violation of international humanitarian law. Densely populated civilian areas must not be used for military purposes, Guterres stressed.

The UN chief expressed deep concern over the continuation of violent clashes between Israeli security forces and Palestinians across the occupied West Bank, including East Jerusalem, and urged Israel to cease demolitions and evictions in the occupied Palestinian territory.

Guterres said he is working with Egypt, Jordan and Qatar to encourage all sides to halt the violence and is also engaging with all parties to the conflict, including Hamas, to secure an end to hostilities.

The United Nations supports a two-state solution on the basis of the 1967 lines, with Jerusalem as capital of both Israel and Palestine.