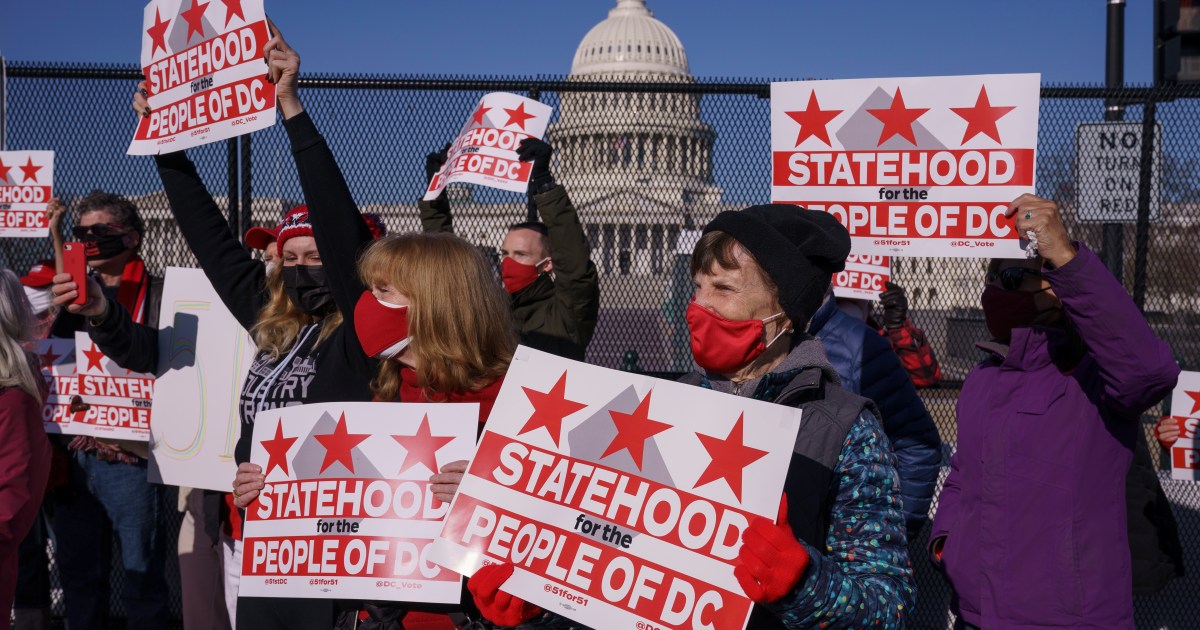 Bill to grant DC statehood passes in party line vote, but faces tough opposition from Republicans in the US Senate.

Democrats in the United States House of Representatives approved a bill on Thursday to make the city of Washington, DC, the 51st US state.

Voting along party lines with minority Republicans in opposition, the House approved the bill 216-208. It now faces a tough fight in the US Senate where it is viewed by Republicans as a Democratic power grab.

While the city’s 705,000 residents are able to vote for candidates for US president, they do not have voting representation in Congress and yet must pay taxes to the government.

Making Washington, DC, a state would create new positions in Congress – one House representative and two senators – that all but certainly would be filled by Democrats, as DC’s residents have historically voted for Democratic candidates in overwhelming numbers.

The legislation proposes creating the 51st state out of a square of land on the Potomac River set aside by Congress in 1780 for the nation’s capital. A sliver of property around the White House, the US Capitol and the National Mall would remain a federal district, as spelled out in the US Constitution.

Under the newly approved House bill, the new state would be known as Washington, Douglass Commonwealth — named after famed abolitionist Frederick Douglass, who lived in Washington from 1877 until his death in 1895.

An identical statehood bill passed the House in 2020, but it quickly died in the then-Republican-controlled Senate. Now, with the 2020 elections leaving Democrats in control of both chambers and the White House, Republican senators may resort to a filibuster to stymie the statehood bill.

For lifelong statehood proponents like Eleanor Holmes Norton, Washington’s long-serving, non-voting delegate in the House, Thursday’s vote was a culmination of a life’s work.

“My service in the Congress has been dedicated to achieving equality for the people I represent, which only statehood can provide,” Norton said at a Wednesday news conference.

“My life as a third-generation Washingtonian has marched towards this milestone.”

Senate Majority Leader Chuck Schumer, a Democrat, indicated in a tweet on Thursday he intends to bring the bill up in the Senate.

I was proud to re-introduce this bill in the Senate, and we are working to make #DCStatehood a reality.

The measure has received strong support from President Joe Biden’s White House, which released a statement on Tuesday calling Washington’s unrepresented status “an affront to the democratic values on which our Nation was founded”.

The White House praised Washington as worthy of statehood, with “a robust economy, a rich culture, and a diverse population of Americans from all walks of life who are entitled to full and equal participation in our democracy”.

Republican opposition was on display during Thursday morning’s floor debates in advance of the House vote.

The nation’s founding fathers, “never wanted DC to be a state and they specifically framed the Constitution to say so”, said Georgia Republican Representative Jody Hice.

“This is absolutely against what our founders intended, and it ought to be soundly rejected.”

But Virginia Democratic Representative Gerald Connolly pointed out that Kentucky was once a part of Virginia, yet was carved out as a state by a simple act of Congress.

Connolly argued that the federal district was a theoretical concept when first conceived, not the community it is now with a larger population than the states of Vermont and Wyoming.

“When the Constitution was written, this place didn’t exist,” he said.

During a March hearing by a House oversight committee, Republicans had argued DC was unfit for statehood while calling the entire effort a cynical Democratic power play.

Opponents proposed a variety of alternatives, from absolving Washingtonians of federal taxes to “retroceding” most of DC back into the state of Maryland.