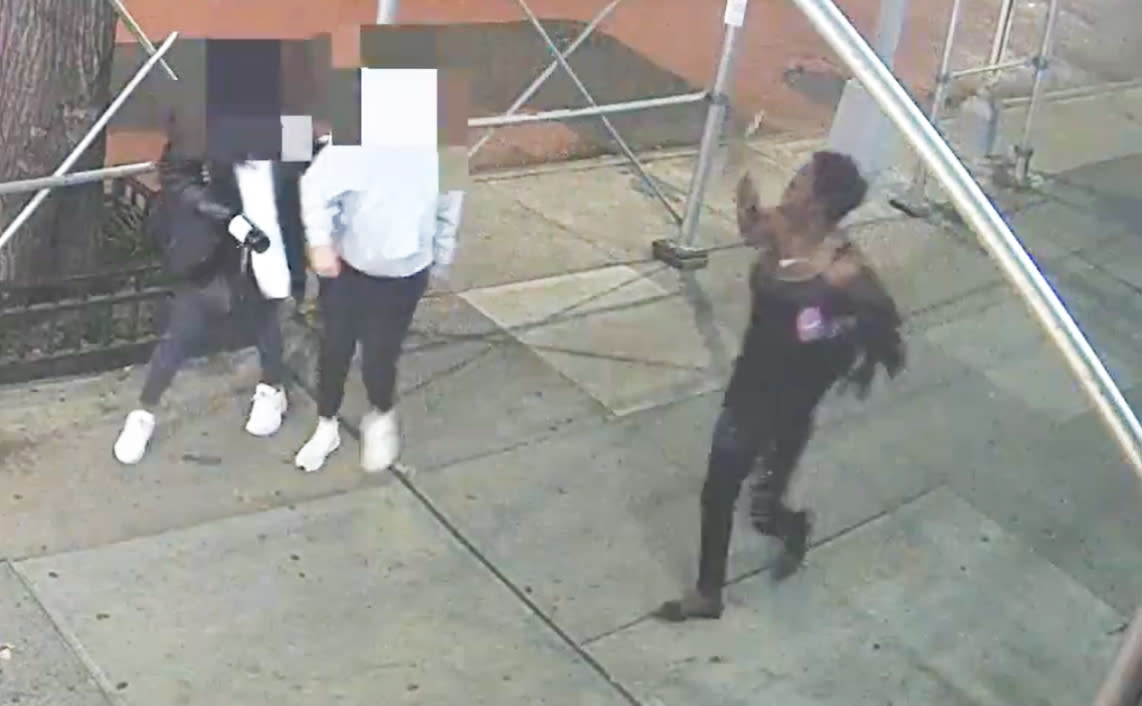 An Asian woman in New York City was attacked in the head with a hammer by a stranger who demanded the victim remove her mask, police said Monday.

The New York Police Department’s Hate Crimes Task Force is investigating the assault. No arrests have been made as of Tuesday morning.

The attack occurred about 8:40 p.m. ET Sunday in the 410 block of West 42nd Street, which is in Hell’s Kitchen in Manhattan, police said.

Police released surveillance video that showed the moment a woman appeared to accost two Asian women walking on the sidewalk from behind. The woman demanded that they remove their masks before striking one of them in the head with a hammer, police said.

The victim was identified as a 31-year-old woman who was taken to the hospital for a laceration to the head, according to authorities. The other Asian woman, 29, did not appear to suffer any physical injuries.

The 31-year-old woman told NBC New York that she was “shocked,” adding that she has lived in New York City for two years.

“I’ve never faced this kind of thing,” she said. “This has never happened in my life.”

After the attack, the woman with the hammer ran, police said. Authorities are still on the search for her.

“I am disgusted by this violent attack in Midtown Manhattan, the latest seemingly senseless and despicable hate crime against Asian Americans in this state,” Cuomo said in a statement on Tuesday. “We will do everything in our power to protect those who are vulnerable to these attacks and to hold cowardly perpetrators accountable to the full extent of the law.”

Hours before the attack, hundreds of New Yorkers, including city officials, gathered at a rally in Flushing, Queens, denouncing the wave of hate crimes against Asian American communities.

“If you hate, get the hell out of here because you don’t deserve to live in New York City,” Mayor Bill de Blasio said at Sunday’s rally.

The “Stop Asian Hate” march was held a day after two other Asian Americans were targeted in separate attacks in Queens and Brooklyn, police said.

On Saturday afternoon, a group of five teens punched a 15-year-old Asian boy while spewing anti-Asian remarks at him in Rego Park, Queens, according to authorities. The boy was taken to the hospital for minor injuries.

Three of the suspects were taken into custody and charged with misdemeanor assault and harassment, police said. Investigators are still looking for two other suspects.

Shortly after the Queens attack, a stranger pushed a 52-year-old Asian woman towards the subway track at the Myrtle Avenue-Broadway Station in Bedford-Stuyvesant, Brooklyn, police said. No injuries or arrests were reported.

The NYPD Hate Crimes Task Force is investigating both incidents.

The hammer attack occurred just a block from where a man repeatedly kicked a 65-year-old Asian woman outside a luxury apartment building as witnesses appeared to watch in late March.

Authorities arrested the suspect who was already on lifetime parole for fatally stabbing his mother in 2002. The two apartment building doormen who were caught on video appearing to watch the attack unfold were fired, the building’s owner said.

Last week, a new analysis of hate crime data revealed that the increase in anti-Asian attacks has remained consistent.

The analysis, released by the Center for the Study of Hate and Extremism at California State University, San Bernardino, found that hate crimes surged 169 percent from the first quarter of 2021 to the same time period in 2020 across 15 major cities.

New York City accounted for the largest surge from 13 hate crimes in the first quarter of 2020 to 42 in the same period this year — a 223 percent jump, according to the research.