George North has had a rough ride these past three weeks.

Ticking off 100 caps for Wales and winning a fourth Six Nations title, he was hurtling at full speed towards a third Lions tour. Then suddenly, snap.

‘I went to side-step and it must have been super unlucky with timing, the firing of my muscles and my knee,’ he tells Sportsmail, speaking for the first time about the injury he suffered for the Ospreys against Cardiff Blues at the end of last month. 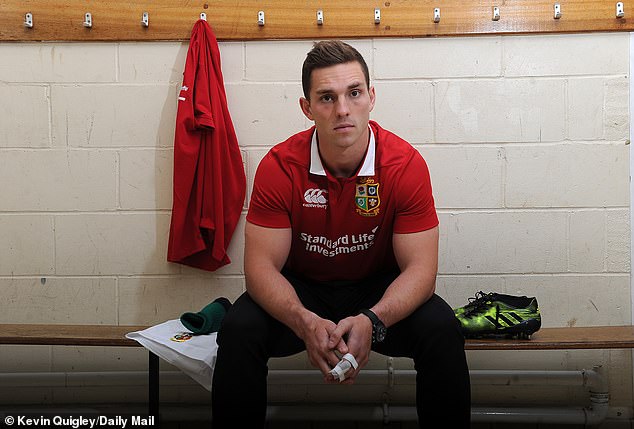 ‘I don’t know what happened. I obviously asked the surgeon various questions – it was just one of those unlucky ones.

‘I had a PCL (posterior cruciate ligament) injury in 2018 which didn’t keep me out for too long – but beyond that I’ve had absolutely no issues at all with my knees. So I didn’t really know what I’d done. But then very quickly it wasn’t looking the best.’

North had suffered a clean rupture of the anterior cruciate ligament in his right knee. A seemingly innocuous incident in the hastily-organised and low-key PRO14 Rainbow Cup had immediately ended his Lions dream. 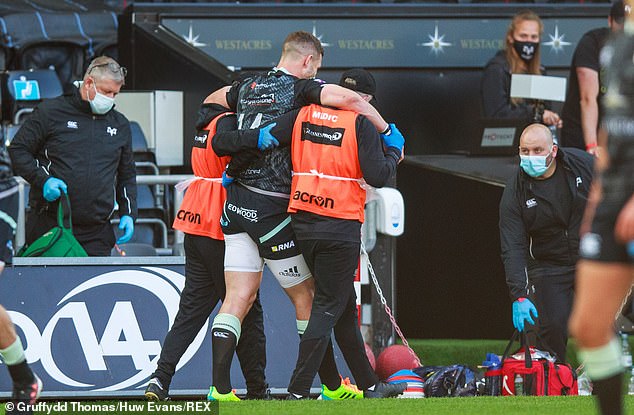 ‘It became clear I’d need an operation,’ continues the 29-year-old. ‘Very luckily it’s a singular issue with nothing else going on. The positive was it was a very straightforward operation, which was brilliant, but the timing was probably the worst ever. Lucky and unlucky at the same time.’

Four weeks on North has not yet quite come to terms with the shattering blow. Facing at least seven months of rehabilitation now, he is honest enough to admit he is heartbroken.

‘I still don’t know how I feel at the moment if I’m honest,’ the 2013 and 2017 Lion says with a sigh. ‘I’m still processing it. The biggest thing is playing for the Lions and that was my biggest motivator. With Wales and Ospreys I found a bit of rhythm and was enjoying my rugby.

‘The Lions was my big fuel and focus, so to have that taken away in a split second is pretty tough to take. I had the surgery three days before the squad announcement so that didn’t help my mood either. 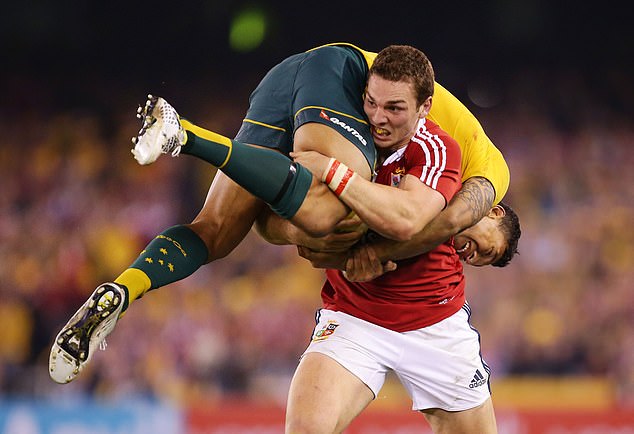 North, who faces lengthy rehab, says playing for the Lions was his ‘big fuel and focus’

‘We all know the risks when we take the field, the life we chose as such. It’s been really tough to take – and it’s still early doors. This is the end of week three after surgery, so I have a long, long way to go.

‘Unless there is a magic wand it won’t happen quickly. I’ve found it tough but the first step is getting it fixed.’

North’s unavailability set Lions dominoes falling. Without a Test centurion and proven finisher who is 6ft 4in and 16 stone, adept at centre and wing, coach Warren Gatland turned to Duhan van der Merwe, Bundee Aki and Chris Harris – those who might not have made it if North was fit.

While he will be rehabilitating with Welsh flanker Dan Lydiate, who also injured a knee in February, and spending more time with wife Becky, the former GB Olympic cyclist, and one-year-old son Jac, the Lions will live his dream. It is raw for North now but he will tune in for the games when they come round.

‘At the end of the day we’re all rugby fans,’ he says. ‘Unfortunately I didn’t get to go but there’s a lot of my mates on that tour. But I get more time with my family now, a bit of a rally round. Every cloud and all that, in what is a strange old time. It’ll be nice to give the body and mind a break from what has felt like the world’s longest season.’ 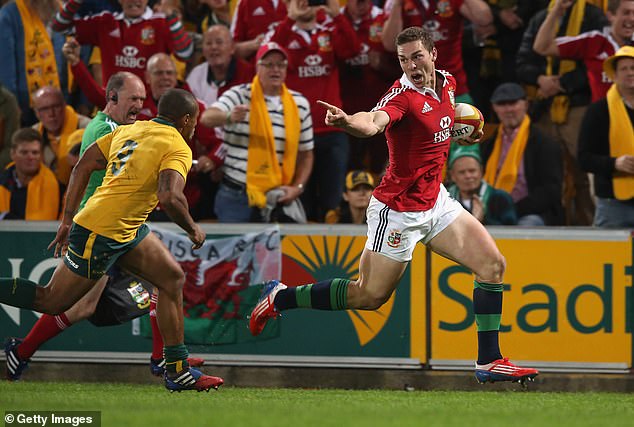 On Sunday, North has the perfect escape. A keen biker, he is joining the Distinguished Gentleman’s Ride – a motorcycling event which gathers enthusiasts across 107 countries, wearing their finest threads while riding classic machines — to raise money for men’s health charity Movember.

Since Movember came on board the ride has raised £3.4million in the UK alone. North is aiming to make £5,000 and is now an ambassador having taken part with his friends at Baffle Culture club near Abergavenny.

Due to his injury he cannot actually ride his Triumph Scrambler so he has had to get inventive. ‘I’ve managed to source a sidecar!’ North explains. ‘All this work to help people out and then I couldn’t bloody ride myself! I don’t know if I’ll fit in it – hopefully I do! I don’t want anything too restrictive! It took some finding, especially at short notice but I sourced one through a friend.’

So North will be dressed up to the nines in tweed-twill jacket, tie and wax coat, hoping his ‘one-legged sun-dance’ has kept bad weather at bay so he can roll round Welsh roads on a ride-out – all for a good cause. 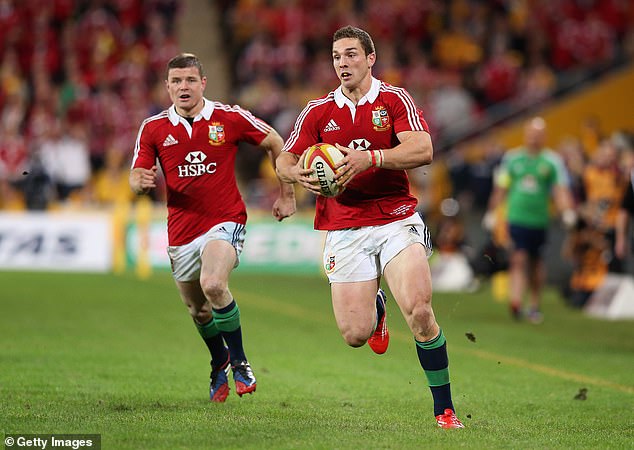 ‘I know it’s not the most challenging thing to do for charity but it’s more about the unity from raising money as a collective,’ he says. ‘When you catch someone going the other way looking dapper on their bike, it’s the nod or a wave to show you’re part of something bigger which is wicked.

‘The stereotype is that men don’t talk about things, and rugby players in particular don’t, with the macho persona. For me, it’s a great way we can help each other out. Not just talking men to men, but with prostate cancer awareness, men’s mental health and suicide prevention.

‘In the current state of the world where the pandemic has put more pressure on, me supporting such a great cause and event was an honour.’

North loves to ride as a release from those pressures – sometimes with Lions captain Alun Wyn Jones or Welsh flanker Josh Navidi – chugging round the Brecon Beacons, up to his old home of Anglesey or just up the Valleys. He wants to attempt the North Coast 500-mile route round the Scottish highlands, when both legs work. 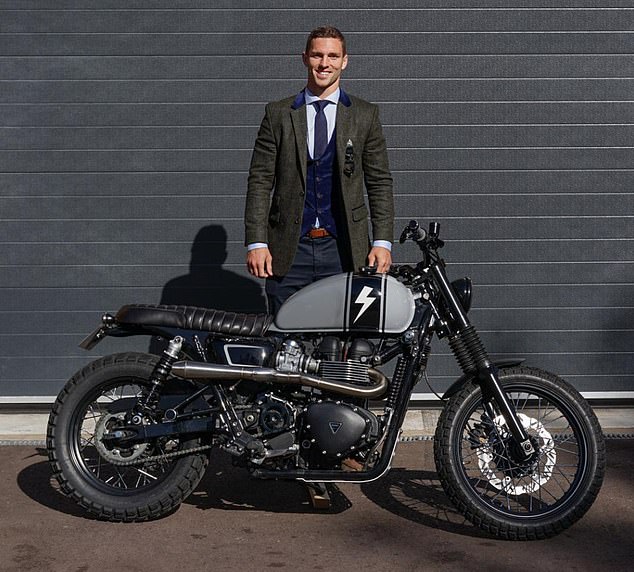 North, a keen biker, will be able to switch off when he joins the Distinguished Gentleman’s Ride

‘It allows me to put a helmet on and blend in normally, whereas usually I’ve got thousands of people shouting at me for doing something wrong,’ North explains.

‘My bike isn’t a sporty one, it’s just about chilling and enjoying the ride, having that switch off. It keeps me focused on rugby as I can have that release when I’m not playing to get away from it.’

Switching off will be key as he takes the time to replenish body and mind during his injury lay-off.

‘Your mindset has got to change from the grieving stage to the fixing stage,’ he concludes. ‘I hope nothing happens to any of the Lions players. The nature of the beast is that injuries do happen. I’ve felt it and it’s not much fun but you’ve got to try to get back into one piece, ready to go.’

George North is an ambassador for the 10th annual Distinguished Gentleman’s Ride, in partnership with men’s health charity Movember.