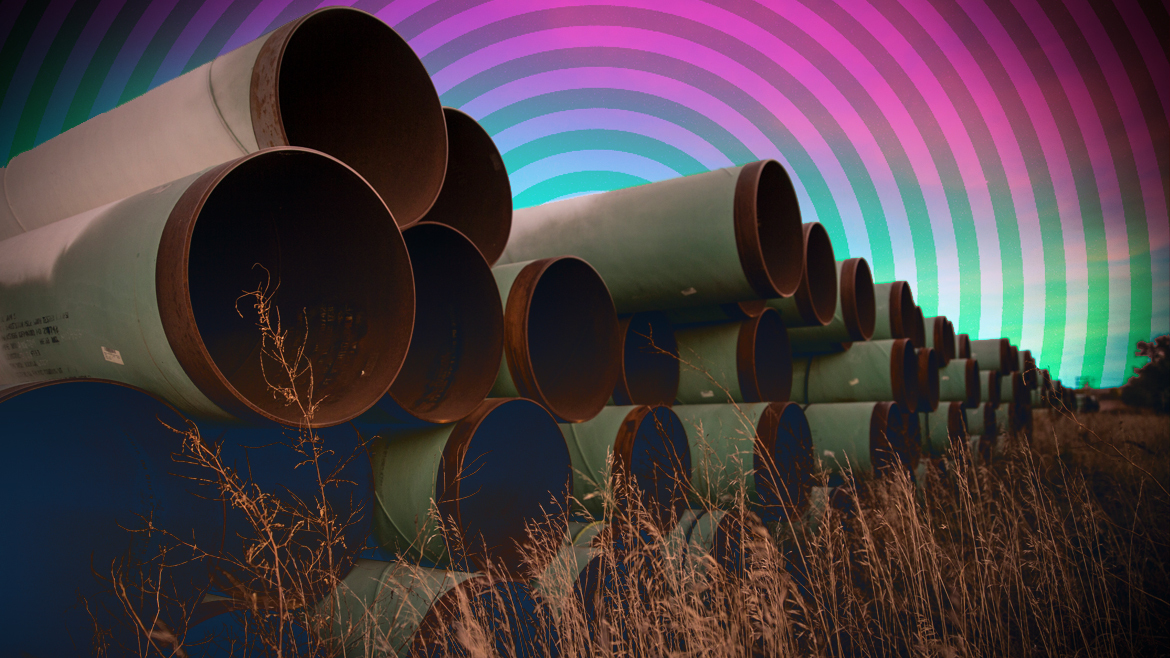 “The 360” shows you diverse perspectives on the day’s top stories and debates.

A lawsuit filed by 21 states earlier this month seeks to overturn President Biden’s decision to cancel construction of the controversial Keystone XL pipeline. The suit, filed by attorneys general in Republican-led states, claims that Biden overstepped his authority when he revoked a federal permit for the pipeline as part of a flurry of executive orders signed on his first day in office.

First proposed in 2008 by the Canadian oil company TC Energy, the 1,200-mile Keystone XL pipeline would carry more than 800,000 gallons of crude per day from oil fields in Canada to Nebraska, where it would connect with existing pipelines that feed refineries on the U.S Gulf Coast. Former President Barack Obama canceled the pipeline in 2015 after years of intense opposition from environmentalists and Native American activists. The Trump administration later reversed that decision in 2017, but legal challenges delayed the start of construction until last summer. By the time the project was scrapped, only about 90 miles of pipeline along the U.S.-Canada border had been built.

In his order revoking the permit, Biden argued that construction of the pipeline would run counter to the goal of transitioning the U.S. to green energy and combating climate change. Despite the new lawsuit and years of back-and-forth jockeying, most experts say this latest move likely marks the death knell for the Keystone XL pipeline.

Biden’s decision to shutter the Keystone XL pipeline was celebrated by environmentalists, who had for years warned of the dangers posed by Canadian tar sands oil — which takes substantially more energy to extract and is much more difficult to clean up if spilled than traditional crude. Many Native American groups applauded Biden for blocking a project they believe would have impacted their drinking water and violated tribal sovereignty.

A number of energy analysts argued that canceling the pipeline made economic sense as well. In the 12 years since Keystone XL was first proposed, the global price of oil has been cut nearly in half, making it unnecessary for the U.S. to purchase comparatively expensive Canadian imports, they argue.

Critics of the cancellation say the pipeline would have brought thousands of jobs to struggling rural communities — a claim opponents argue is based on misleading numbers. Some even make the case that the pipeline may have ultimately had a positive impact on the environment. Without the pipeline, they argue, Canadian oil producers will rely on less efficient and riskier modes of transport, such as rail.

Some economists say the U.S. shouldn’t count on oil prices being low forever. If another oil crisis happens in the near future, the country may regret passing on the opportunity to maximize its ability to bring in imports from a trusted neighbor, they argue.

The apparent conclusion of the long Keystone XL saga doesn’t mean that fights over oil pipelines will come to an end. Activists are hoping to convince Biden to shut down the Dakota Access Pipeline, which was completed in 2017 after months of heated protests by local Native American tribes. There is also a brewing movement to halt construction of a new pipeline known as Line 3 that will carry Canadian oil across Minnesota and Wisconsin if completed.

“The Keystone pipeline would import dirty, high-sulfur Canadian oil to U.S. refineries. Canada would reap the oil profits, while the United States would get stuck with the refinery pollution. So much for increasing American energy independence.” — Editorial, St. Louis Post-Dispatch

“The Keystone XL pipeline was an artifact from an earlier time. When it was proposed in 2008, the price of crude had jumped to over $120 a barrel, causing some to fret that the energy supply would fall short of demand. Oil is now down to about $50 a barrel, thanks in large part to the shale-oil boom. Thus, American oil producers won’t be losing much sleep over the loss of a venture that would have added to supply, possibly depressing their prices even more.” — Froma Harrop, Newsweek

The pipeline fight is a huge win for Native Americans

“There is every reason to celebrate the end of a decade-long fight against Keystone XL. Tribal nations and Indigenous movements hope it will be a watershed moment for bolder actions.” — Nick Estes, Guardian

“The Keystone XL pipeline was never about any single pipeline. It’s about establishing a litmus test rooted in climate science and climate justice for government projects and infrastructure.” — Environmental activist Kendall Mackey to Vox

The U.S. should do everything it can to reduce its fossil fuel dependence

“My instinct is to always side with the folks who don’t want to drill for more oil.” — Gail Collins, New York Times

“The opposition to Keystone XL is almost wholly ideological, driven by a quasi-religious abhorrence of fossil fuels and the wealth, human well-being, and independence from government coercion that they facilitate.” — Benjamin Zycher, Detroit News

The U.S. may miss the Keystone XL during the next oil crisis

“When oil prices next boom (and trust me, they will), investors will resume interest in pipeline projects and whoever is in the White House may regret Keystone XL’s cancellation because the United States will have to rely more on less stable trading partners for oil.” — Robert McNally, CNN

“Killing Keystone won’t keep fossil fuels in the ground. It will merely strand billions of dollars in Canadian investment and kill thousands of U.S. jobs while enriching adversaries and alienating an ally.” — Editorial, Wall Street Journal

“By a stroke of a pen, Biden threatens thousands of construction jobs. So much for old Joe, friend of the working man.” — Editorial, Advocate

Pipelines are the safest way to transport Canadian oil

“Environmentalists may have cheered when President Biden pulled the plug on the Keystone XL pipeline, but his decision is sparking concerns of a greater calamity down the tracks as the risks associated with transporting Canadian crude oil by rail start to pile up.” — Barnini Chakraborty, Washington Examiner

“This would benefit Canadian producers and their investors, American refineries and their large, excellently paid work forces — those good, high-paying, blue-collar jobs Biden talks about — and, most important, American consumers, who would have access to yet another source of fuel at attractive prices from a nearby friendly country. This sort of thing is the point of international economic cooperation.” — Editorial, National Review

Is there a topic you’d like to see covered in “The 360”? Send your suggestions to the360@yahoonews.com.