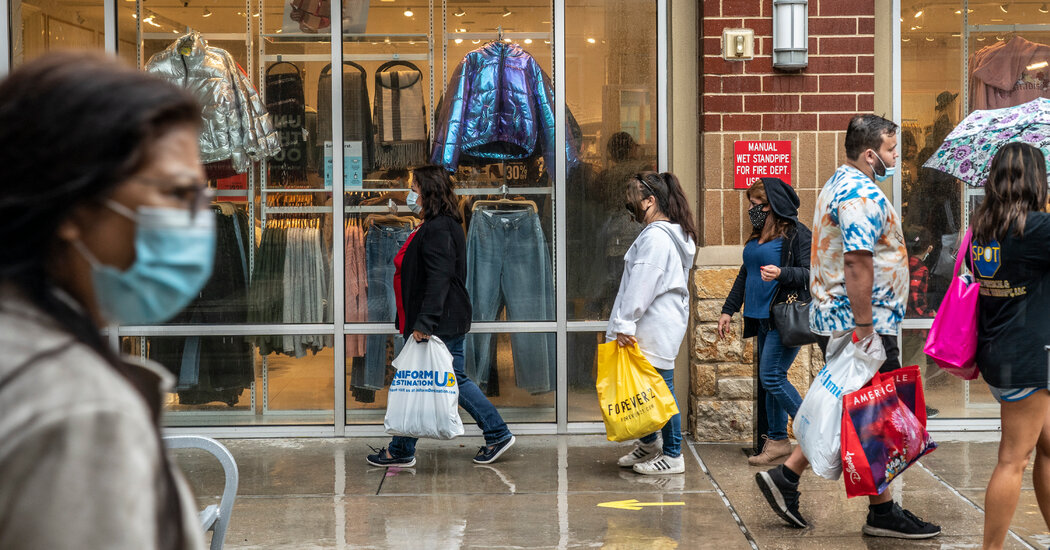 The retail industry was in the midst of a transformation before 2020. But the onset of the pandemic accelerated that change, fundamentally reordering how and where people shop, and rippling across the broader economy.

Many stores closed for good, as chains cut physical locations or filed for bankruptcy, displacing everyone from highly paid executives to hourly workers. Amazon grew even more powerful and unavoidable as millions of people bought goods online during lockdowns. The divide between essential businesses allowed to stay open and nonessential ones forced to close drove shoppers to big-box chains like Walmart, Target and Dick’s and worsened struggling department stores’ woes. The apparel industry and a slew of malls were battered as millions of Americans stayed home and a litany of dress-up events, from proms to weddings, were canceled or postponed.

This year’s civil unrest and its thorny issues for American society also hit retailers. Businesses closed because of protests over George Floyd’s killing by a white police officer, and they reckoned with their own failings when it came to race. The challenges faced by working parents, including the cost and availability of basic child care during the pandemic, were keenly felt by women working at stores from CVS to Bloomingdale’s. And there were questions about the treatment of workers, as retailers and their backers treated employees shoddily during bankruptcies or failed to offer hazard pay or adequate notifications about workplace Covid-19 outbreaks.

Many Americans felt the effects of the retail upheaval — the industry is the second-biggest private employment sector in the United States — and some shared their experiences this year with The New York Times.

‘That’s what I did my whole life’

Joyce Bonaime, a 63-year-old in Cabazon, Calif., has worked in retailing since the 1970s. In the past 14 months, she became one of many store employees whose lives were upended by bankruptcies — first at Barneys New York and more recently at Brooks Brothers.

Ms. Bonaime had spent about 10 years as a full-time stock coordinator for a Barneys outlet at Desert Hills Premium Outlets near her home, overseeing the shipping and receiving of designer wares, when the retailer filed for bankruptcy and liquidated late last year.

“Barneys treated people very badly at the end there,” Ms. Bonaime said. The retailer, she said, sent inconsistent messages about severance payments and the timing of store closures that limited people from finding other jobs just before the holiday shopping season.

After Barneys, Ms. Bonaime secured a full-time stockroom position at Brooks Brothers in the same outlet mall. But the pandemic forced the store to temporarily close in March, and she was furloughed. She anticipated returning once the store reopened this summer. But Ms. Bonaime’s job was terminated this month and she lost her health benefits. She is now collecting unemployment checks for the first time in her life.

When Ms. Bonaime started her career, working at shoe stores and completing a management training program at one chain, retailers had a different relationship with employees and communities, she said.

“We went through training on the bones in the foot and the muscles; we knew a lot about our industry,” she said. “We would reach out to local high schools and work with the cheerleading team and find a shoe they liked for outfits and give them a discount and make sure they had the right sizes.”

Ms. Bonaime, who is getting by right now, feels stuck. She had planned to work a few more years before retiring, but her options are limited. Businesses at the outlet mall are struggling — and it was already hard to interview last year as a woman in her 60s, she said. Amazon is hiring, but she is concerned about the risk of accidents in a warehouse.

“This pandemic just changes everything because I would have no problem getting a job otherwise,” she said. “I just don’t think there’s going to be anything in retail, and that’s what I did my whole life.”

‘I was collateral damage’

Soon after the pandemic hit, Nordstrom said it would permanently close its three high-end Jeffrey boutiques, which were founded by Jeffrey Kalinsky and acquired by the retailer in 2005. Mr. Kalinsky, a Nordstrom executive who had focused on bringing designer apparel to the retailer, retired as part of the move.

The Jeffrey stores, in New York, Atlanta and Palo Alto, Calif., had dressed the likes of Gwyneth Paltrow and even been lampooned on “Saturday Night Live.” The first location, in Atlanta, would have celebrated its 30th anniversary in August.

Mr. Kalinsky, 58, said in an interview that he was recovering from Covid-19 at the end of March when he became aware that the stores might remain shut after a temporary closure.

“It felt like I had a gun pointed at me,” he said. “The folks I always dealt with at Nordstrom were always very transparent, and I can only surmise that they were looking at how to position themselves to get through this period — and I was collateral damage.”

He had once told the Jeffrey staff that it was like the original cast in a Broadway musical, performing at an “amazing level” for customers every day. The hardest part of this year was telling employees about the closing, he said.

“That day was probably the most difficult, emotional day of my entire life,” he said. “I felt just gutted. It was indescribable.” Employees have told him that they “miss the merchandise, they miss the edit, they miss the specialness.”

His goal was for Jeffrey to carry the best merchandise but “sell it in an environment that was very democratic,” he said. “I wanted to showcase it all and wanted it all to be next to each other. I wanted the friction of Gucci next to Dries next to Comme des Garçons. I wanted to feel the tension in a good way because that, in my opinion, is how the perfect closet is.”

Mr. Kalinsky hopes to find a job designing for an American brand, saying he is not prepared to retire from retailing. He wonders if Jeffrey could have survived the pandemic by working with vendors and landlords.

“We had an impressive business, a wonderful clientele, and we would have been fine — but did we have a piggy bank for Covid? No,” he said.

A man with a van

Trent Griffin-Braaf started this year feeling more confident than ever. The transportation company he created to ferry guests from hotels in the Albany, N.Y., area to local attractions like the racetrack in Saratoga Springs was catching on.

But when the coronavirus shut down tourism, weddings and conferences, Mr. Griffin-Braaf’s passenger vans were idled and his business was in jeopardy. “We were really in a rough place,” he said.

In the late summer, his company became a carrier for Amazon and shifted to e-commerce deliveries. His team of 70 drivers and other staff include immigrants from Africa and India, workers laid off from restaurants, a struggling nail-salon owner and recent college grads “just trying to figure it out” during the pandemic.

His drivers cover a 150-mile radius around Albany, including many rural areas where the number of Amazon shoppers is increasing, he said. “All you see around here is Amazon,” he said. “Come work for Amazon.”

Many of his drivers were earning 10 hours of overtime a week during the peak holiday season. “I feel blessed to be busy, because so many people aren’t right now,” he said.

Mr. Griffin-Braaf, 36, has not given up on passenger vans. He has started driving workers living in parts of Albany with limited public transportation to their jobs at distribution centers and other businesses far from bus lines.

On the weekends, he volunteers the vans to drive families to visit loved ones in upstate prisons. Mr. Griffin-Braaf, who served time in prison years ago, said that long term, he hoped to have tractor-trailers to move e-commerce packages across the country, and to offer van service in other “transportation deserts” around the state so people could get to work.

‘We are glad you are here’

Lauren Jackson and her two sisters inadvertently chose the wrong time to open the first Black-owned beauty supply store in their hometown, Buffalo: March 7, two weeks before the state ordered them to shut down.

So the sisters reopened it as an “essential business,” stocking hand sanitizers, masks and other pandemic necessities. Their store, the Hair Hive, reopened in early April, which helped them build a customer base while competitors stayed closed.

“Everything happens for a reason,” said Ms. Jackson, 28.

She and her sisters, Danielle Jackson and Brianna Lannie, had talked about opening the store for several years. It is five minutes from their childhood home on the east side of Buffalo, a predominantly Black neighborhood where their parents still live.

The sisters were initially intimidated about trying to break into the well-established industry.

“We didn’t want to tell anyone so they wouldn’t say, ‘You can’t compete with them,’” Ms. Jackson said. “We didn’t even tell our parents.”

The sisters got a loan from a family member and another from a Buffalo nonprofit. Lauren Jackson said she had watched other Black-owned businesses in her neighborhood come and go over the years, including salons, barbershops and restaurants that often closed because the younger generation didn’t want to take over after the founding family members retired. Ms. Jackson wants to break that trend.

“A lot of people come into the store because we are Black-owned,” she said. “They feel comfortable knowing we can relate with what’s going on with their hair. They tell us, ‘We are glad you are here.’”

In June, as the first wave of the coronavirus was finally coming under control in New York, Feisal Ahmed got a call from his manager at Macy’s.

Would he like to return to his job selling luxury watches when the store in Herald Square reopened? “I am already there,” he told his boss. “Put me first in line.”

Mr. Ahmed was in his early 20s and a recent emigrant from Bangladesh when he started working at Macy’s in 1994. He met his wife in the store, was able to make a down payment on a house in Astoria, Queens, and saved up enough money to start his own laundry, which he eventually sold.

But after initial feelings of relief and excitement to return to work after four months of lockdowns, reality set in for Mr. Ahmed. He has gone some days without selling a single watch, for which he would earn a commission.

Last week, business picked up for a few days, driven by last-minute Christmas shopping, but it was nowhere near a normal holiday pace. “The pandemic, job security — people are scared to spend money,” he said.

Still, Mr. Ahmed feels lucky. In New York City, retail jobs make up 9 percent of private-sector employment, and many have been slow to return. At stores selling clothing and clothing accessories, employment is down more than 40 percent from a year ago, according to a recent report by the state comptroller’s office.

Mr. Ahmed said that as a member of the Retail, Wholesale and Department Store Union, he had certain job protections. But he worries about what the winter will bring, as the pandemic continues to keep many shoppers away.

“Employees are scared of what might be coming,” he said.