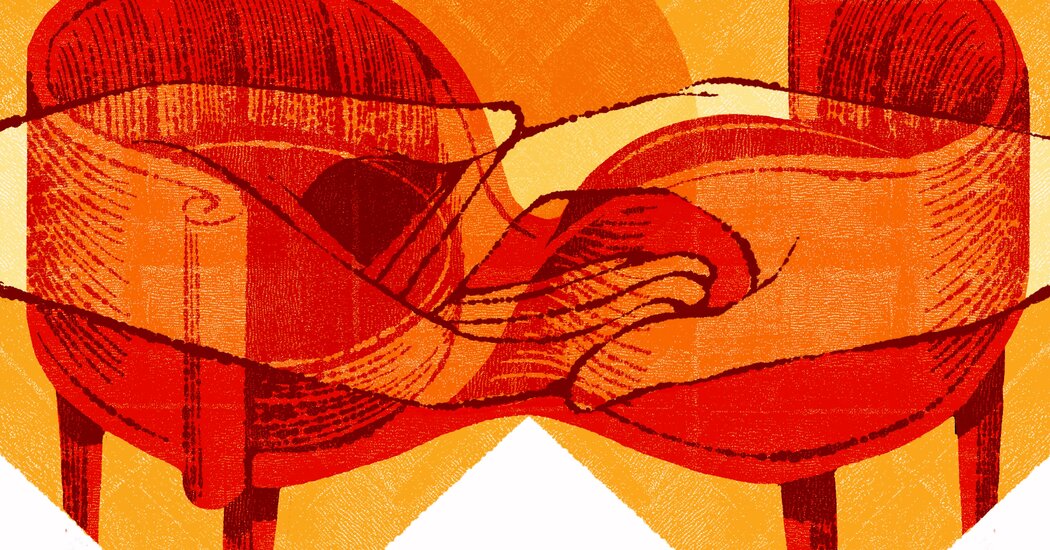 Gone are the days when going to therapy meant being labeled mentally unstable. Therapy today is often viewed as an act of self care, a sign of maturity and healthiness.

Some see it as a signal that a failed marriage is on the horizon. But for many couples, therapy is a form of maintenance, and it has been especially useful during the coronavirus pandemic.

Katy Malone, 36, and her husband, Bryan Baralt, 39, a senior account manager in the e-commerce channel for Blue Triton Brands, first started seeing a relationship therapist when the pandemic forced the couple to work under one roof. With social activities on pause where they reside, in Austin, Texas, there were few options to spend time apart. “It was causing a fair amount of tension and it just made some issues that I think were probably long standing, really come to the surface,” said Ms. Malone, the head of talent acquisition at Rev, a company that provides closed captioning, subtitles and transcription services.

For the past year, the married couple of two years has been seeing a couples’ therapist weekly, with no plans to pause. While the issues related to the pandemic have resolved over time — Austin is now reopened and the couple is able to work and socialize outside their home — Ms. Malone and Mr. Baralt have integrated the sessions into their weekly routine as a long-term practice.

Both have seen the benefits. Mr. Baralt said he has become a better listener. “Just hearing each sentence that she says, one at a time, and not trying to divulge a whole different bunch of sentences has been a benefit for me,” he said. Ms. Malone said the therapy “gives us a really good platform with a moderator who has a very impartial perspective on the problems that we’re laying out in front of them. It carves out a space for us to really address things in a more transparent and honest kind of way.”

Seeing a couples therapist is not uncommon. But it is usually not talked about, with many people assuming it is only taking place just before a marriage or relationship is about to end. The majority of studies conducted on couples counseling focus on marriage counseling, though, leaving out unmarried couples entirely.

Dr. Katz has counseled couples for nearly 13 years. She suggests therapy as a resource in the early stages of a relationship or when differences first arise.

“If couples come in then, they’ll have a much better chance of working through their differences and understanding each other,” she said, adding that early therapy can help them avoid large issues in the future.

One misconception surrounding couples therapy, Dr. Katz said, is that people should only go when they’re in a severe crisis, toward the end of their relationship.

[Sign up for Love Letter and always get the latest in Modern Love, weddings, and relationships in the news by email.]

On average, according to the Gottman Institute, most couples wait six years after identifying a problem before seeking therapy. “When couples wait until a breaking point, it is so much harder to have them come back together because the wounds can be so deep,” Dr. Katz said.

Dr. Katz notes the struggles in simply bringing two parties together from different backgrounds. “People are living together, they come from different worlds, different cultures, and they’re bringing in their differences and their ideas with them,” she said. The goal, she added, “is to know how to live with their own differences and appreciate them.”

Torie Fritz, 29, a teaching assistant at Michigan State University in East Lansing, Mich., and her husband Luke Fritz, 33, a project manager, have been married for eight years. Differences in communication styles made it hard for the couple to communicate effectively, eventually leading them to see a therapist in 2019 at the suggestion of Ms. Fritz’s mother, who is also a therapist.

During their sessions, they addressed their family origins. They learned from their therapist that every relationship is part of a cycle in which one person’s actions triggers another person’s action, which could possibly accelerate into a larger issue.

“Since beginning the sessions, we’ve been much more mindful of knowing when either of us have entered that cycle and knowing that we’re feeding off the other person and we’re feeding back to them,” Mr. Fritz said. “Taking our foot off the gas earlier in the cycle and recognizing it has really helped de-escalate something that may become an issue.”

To some outsiders, being in therapy for more than two years can seem like a sign of no progression, but to the couples it is seen as a practice of growth, Dr. Katz said.

“The same way that you would go to the gym and exercise your muscles, continuously, the emotional muscles are the same,” she said. “Couples need to exercise that part of them as well, and to get help and support.”

The duration of therapy will, of course, vary by couple. Most appreciate having an unbiased moderator mediate uncomfortable conversations.

“It’s really helpful to have some outside expert advice, someone who is familiar with the research about what helps couples feel good about their relationship and can also coach and support them,” said Jean Fitzpatrick, a licensed psychoanalyst in Manhattan.

Ms. Fitzpatrick has been working with couples for more than 25 years and believes “everything in our society right now kind of conspires to pull people away from their relationship.” Before the pandemic, Ms. Fitzpatrick said, several of her clients were distracted by work, traveling and other endeavors, often prioritizing the relationship last. But once the pandemic hit, her clients have been allotted more time to spend together, and therefore work on their relationships.

Ms. Fitzpatrick wants her clients to practice prevention. “Even having a relationship with a therapist who they trust and who gets them and has seen them when they’re in the glow of the beginning of their life together is worth having in their back pocket for the future,” she said.

Since incorporating therapy into their routine, along with date nights, Ms. Malone and Mr. Baralt have developed a fresh perspective on their relationship.

“We’re very much in love,” Ms. Malone said. “It’s not like we’re having any huge issues or been thinking about getting divorced or separated. We literally are just doing this in an effort to continue to strengthen our relationship, not to fix a bunch of things.”