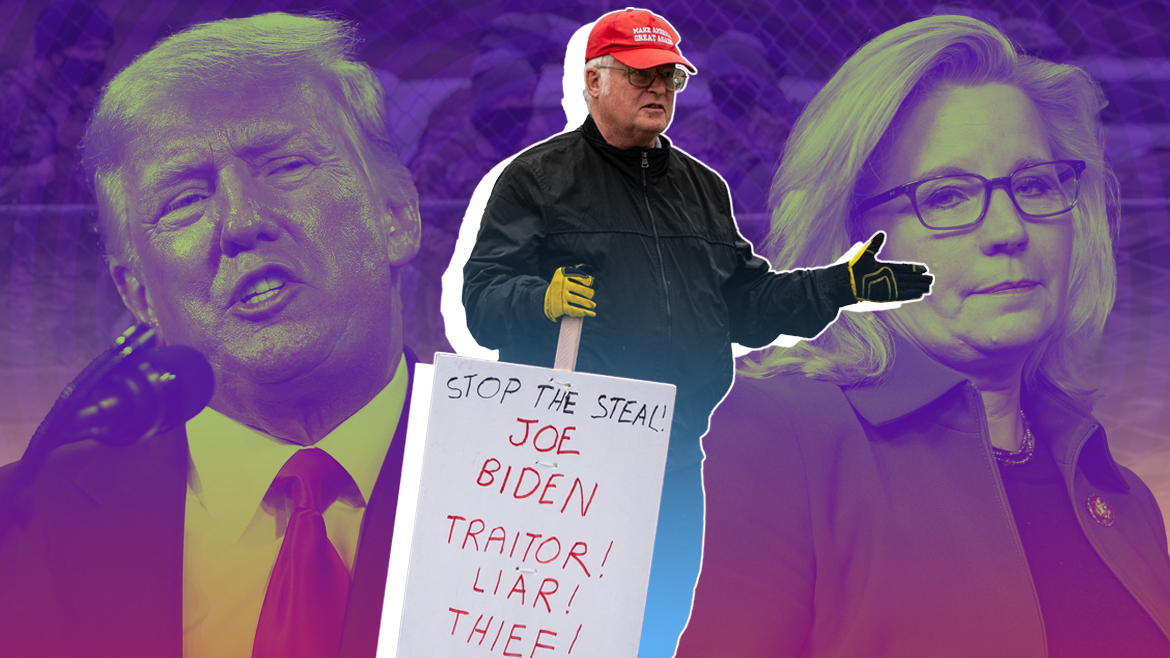 “The 360” shows you diverse perspectives on the day’s top stories and debates.

House Republicans voted Wednesday to remove Rep. Liz Cheney, R-Wyo., from her leadership role in response to her repeated criticism of former President Donald Trump’s lies about the 2020 presidential election and his role in the Jan. 6 Capitol attack.

Cheney, who had been the No. 3 Republican in the House, had received strong rebukes from her GOP colleagues in recent weeks. House Minority Leader Kevin McCarthy — who had previously said Trump “bears responsibility” for the riot — accused Cheney of “relitigating the past” by continuing to condemn Trump’s election conspiracies. She remained defiant after the vote, telling reporters she “will do everything I can to ensure that the former president never again gets anywhere near the Oval Office.”

In the wake of the deadly assault on the Capitol, there was talk of a “civil war” inside the GOP between Trump loyalists and members who sought to end his dominance over the party. That battle has, thus far, been a one-sided affair. Over the past few months, willingness to perpetuate the “Big Lie” that the election was stolen — or, at least, to not publicly challenge the claim — has become a litmus test for Republicans. A recent YahooNews/YouGov poll showed 70 percent of GOP voters falsely believe there was enough fraud in the 2020 election to influence the outcome. Other polls have found similar results.

Like Cheney, party members who have pushed back against Trump have faced the wrath of their colleagues and the GOP base. Sen. Mitt Romney, one of the few Republicans who voted to convict in Trump’s second impeachment trial, was booed aggressively and called a traitor in his home state of Utah. Similar scenarios occurred at the state level. Lawmakers seen as insufficiently loyal to Trump — like Georgia Secretary of State Brad Raffensberger — have been treated as enemies by the former president and his supporters.

The persistence of the Big Lie, despite a complete lack of evidence of widespread voter fraud, has raised concerns that electoral conspiracies will become a core element of the Republican Party for the foreseeable future. “That approach will do profound long-term damage to our party and our country,” Cheney wrote in the Washington Post last week.

Many political analysts say the experiences of Cheney, Romney and others who have rejected Trump’s fraud claims show how futile and self-destructive efforts to combat the Big Lie are. They argue that Trump’s dominance of the party and the intense support he has among the GOP base will force even reluctant Republicans to fall in line for the sake of their own political survival. Others say the GOP needs to keep false fraud claims alive in order to justify new voting laws being enacted in red states — laws that critics say are designed to make it harder for Democractic voters to vote.

Optimists see the possibility that Republicans will eventually abandon the Big Lie. One key factor, they argue, is the risk that aligning with Trump poses to the GOP in future elections. Trump enjoys high levels of support among Republican voters, but he is deeply unpopular with the rest of the country. Aligning with Trump could lead Republicans to lose winnable races, which may force party leadership to rethink their strategy. Others say the media can make a difference by providing a clear message of the threat the Big Lie poses to American democracy and holding GOP lawmakers accountable for their role in promoting it.

House Republicans are expected to appoint Trump ally Rep. Elise Stefanik of New York to replace Cheney in a vote later this week. Despite losing her leadership role, Cheney has announced she will run for reelection next year. Already, six Republicans have lined up to challenge her in the GOP primary.

“Remaining in the GOP’s good graces requires that elected officials either actively embrace lies about 2020 or, at very least, refuse to condemn them. As a result, 2020 conspiracy theories are exerting a dominant influence on the party — shaping both legislation and the base’s worldview.” — Zack Beauchamp, Vox

“It isn’t Cheney who is preventing Republicans from moving on and repairing the wounds from the 2020 election. It is Trump himself. Six months after being defeated, he still won’t drop it — in statements, in TV appearances, and in impromptu speeches to small crowds at Mar-a-Lago.” — Editorial, National Review

“Loyalty to Trump and his lies isn’t the most important thing Republicans are asserting here. Instead, Republicans may be unshackling themselves from any obligation to acquiesce to future presidential election outcomes they don’t like — that is, liberating themselves to overturn those outcomes by any means necessary.” — Greg Sargent, Washington Post

Mainstream Republicans are too timid to push back against Trump

“Most [Republicans] know it’s not good if embittered generations of voters turn on the system and come to feel no fidelity to democratic outcomes. … They think the way out is to be quiet and hope the fever passes. Here is a fact of our current political life: The fever never passes. It has to be treated. By not pushing back they create more crazy.” — Peggy Noonan, Wall Street Journal

“Four months after the Capitol riot, it’s clear that many in the press still don’t know how to cover those who supported Donald Trump’s ‘Big Lie’ about election fraud. And while news organizations dither, the Big Lie continues to spread.” — Alex Shephard, New Republic

Election conspiracies will cost the GOP a crucial voting bloc

“By muddying the waters around what happened, the Lie is allowed enough space to flourish. It must be eradicated entirely through an honest, straightforward accounting of what happened.” — Jack Holmes, Esquire

Voters will punish candidates who back Trump’s false claims

“If someone running for secretary of state endorses the false claim that the 2020 election was stolen, they should be uniformly condemned. Support should go to those who promote election integrity, regardless of party, and who put in place fair and transparent procedures.” — Richard L. Hasen, New York Times

The Big Lie will doom Republicans in upcoming elections

“Trump’s inability to acknowledge that he lost to a doddering gaffe machine who hardly campaigned fuels this circular firing squad, as does a liberal media that would much rather cover Trump’s rage blog than the doddering gaffe machine who is now the president. Republicans are just a handful of seats from reclaiming the House. … Letting Trump run the party into the ground as a vanity play makes that fight much more difficult.” — Zachary Faria, Washington Examiner

The truth will eventually win out

“Try as they may, the GOP both here and nationally seem to have forgotten that ‘you can’t fool all the people all of the time.’ The truth, both about what happened in the legislative session and the presidential election, will eventually prevail — and the Big Lie(s) won’t fly.” — George Ochenski, Missoulian

Is there a topic you’d like to see covered in “The 360”? Send your suggestions to the360@yahoonews.com.