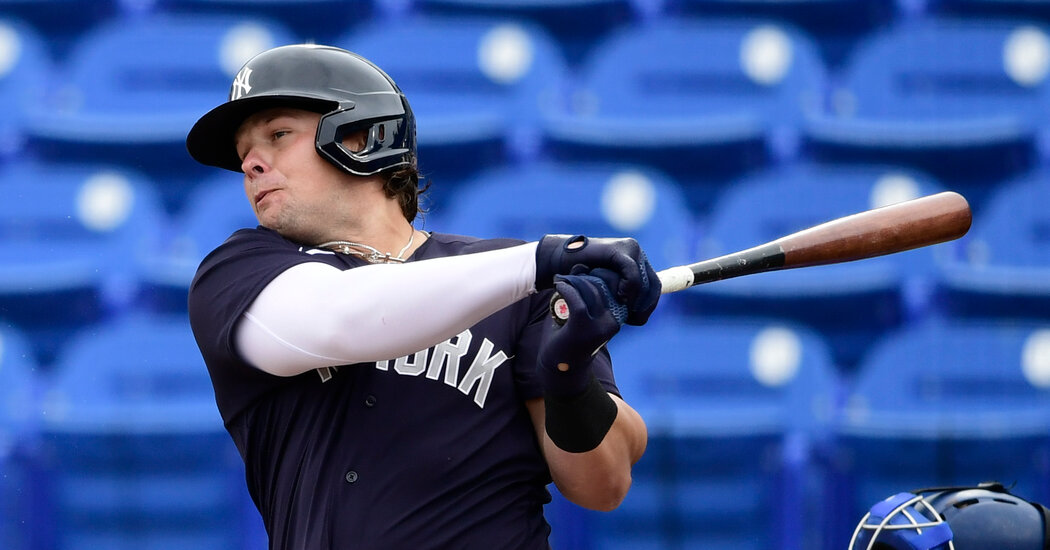 Luke Voit, the Yankees’ first baseman and the major-league home run champion last season, will miss at least the first month of the season to have knee surgery.

Voit, who had been dealing with knee soreness throughout spring training, will have the partially torn meniscus in his left knee repaired next week in New York, Manager Aaron Boone said on Saturday.

Jay Bruce, who had been waiting at home for the Yankees to decide whether they still wanted him, will become the team’s primary first baseman, Boone said. Bruce, 33, a former three-time All-Star, had exercised the opt-out clause in his minor-league contract on Thursday, which started a 48-hour window for the Yankees to add him to the major-league roster or release him.

“I literally knew nothing until very, very recently,” said Bruce, who was given the news early Saturday morning. “I just sat at my house. I kind of felt like I was quarantining.”

Voit, 30, had been able to play through the knee injury but it was repeatedly swelling after games, Boone said. Voit, who hit 22 home runs during the pandemic-shortened 60-game 2020 season and helped carry the Yankees to the playoffs, underwent a magnetic resonance imaging examination on Friday and opted for surgery over continued rehabilitation.

“It felt like calendar-wise it was best to get this over and taken care of and hopefully put it behind him for the bulk of the season,” Boone said.

Voit will be shut down for three weeks and then ramp up for a return. Boone said he expected Voit back “considerably sooner” than June.

In the meantime, backup outfielder Mike Tauchman, who needed to make the season-opening roster or be traded, will also be on the Yankees when spring training ends.

Bruce, who hit .198 with a .721 on-base-plus-slugging-percentage in 32 games with the Philadelphia Phillies last season, took a chance by signing a minor-league deal with the Yankees in the winter.

Bruce, primarily a corner outfielder who has 318 career home runs, began mixing in more first base duty during his tenure with the Mets, which stretched over parts of 2016 to 2018. He stayed away from the team in recent days after exercising his opt-out clause to avoid any injuries and while he awaited the Yankees’ decision.

Although stressed about what would happen, Bruce said he was happy to remain with the club he had hoped to be with all along.

“There was definitely some relief when I made the team,” he said. “And clearly disappointed that Luke went down and is dealing with what he has to deal with. But I’m certain he’ll be back at full strength here very soon.”